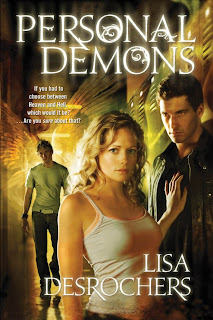 Frannie Cavanaugh has always been a bit of a loner. She’s spent years keeping everyone at a distance, even her closest friends. That is, until Luc Cain enrolls in her school. He’s hot, sarcastic, and dangerous--and Frannie can’t seem to stay away.

What she doesn’t know is that Luc is on a mission. Because Frannie isn’t exactly ordinary. She possesses a skill so unique the King of Hell himself has taken notice, and he’s sent Luc to claim Frannie’s soul. It should be easy: All he has to do is get her to sin, and Luc is as tempting as they come.


Unfortunately for Luc, Heaven has other plans, and he’s just started making progress when the angel Gabriel shows up. Gabe will do anything to keep Luc from getting what he came for, and his angelic charm might just be enough to keep Frannie on the right path.

It isn’t long before Luc and Gabe find themselves fighting for more than just Frannie’s soul. But if Luc fails to win her over, there will be Hell to pay...for all of them.

Before I finally decided to pick it up and read it, I had hear a lot of good things about Personal Demons but I had trouble making my mind up about reading it. To be honest, it was stupid that I took so long to make a decision because I had so much fun reading it. I found myself laughing throughout most of the book, which wasn’t something that had happened to me in a while.

Frannie has always tried to keep people at a distance, never really letting anyone completely in. But when Luc shows up in town and Frannie starts to have feelings that she worked so hard to keep away. Luc isn’t who he appears to be. At all. In fact, he’s actually a demon, a real one from Hell, sent to claim Frannie’s soul. But then things happen that aren’t supposed to be happening, like Luc developing feelings demons aren’t technically supposed to have. And of course when Gabe, an angel sent from Heaven, shows up things aren’t about to get any less complicated.

I liked Frannie a lot. That might have something to do with the fact that she didn’t turn out to be the person I expected her to be. She had a mind of her own and most of the time wasn’t afraid to speak it. And much like her personality, Frannie’s actions were never what I expected. In fact, they tended to be the complete opposite. One thing that normally would have bugged me was how she couldn’t seem to choose between Luc and Gabe. In this case, I was totally with Frannie. If I were in her shoes and I had to pick between the hot (literally) demon from Hell and the sexy angel from Heaven I don’t know what I would do. And of course the fact that she could kick some serious ass only made me like Frannie that much more.

Where to even begin with Luc and Gabe? It’s a lot easier to talk about Luc since there is so much more revealed about him than there is about Gabe. To be honest, at first I was rooting for Gabe because something just seemed off about Luc...other than the fact that he is a demon that is. But then I got to know Luc better and realized he actually isn’t a bad guy, despite the whole demon from Hell thing. Gabe is also pretty great but I just son’t know as much about him so it’s hard for me to have a clear opinion. All that to say, I am Team Luc...but that might change if we ever get anything written from Gabe’s point of view.

The story had me laughing almost constantly. I just loved the whole relationship between Luc and Gabe and how Frannie played into it. And of course there was plenty of action, which kept me very happy. The action was often completely unpredictable. Every time I thought they would finally catch a break, something else happened. And whenever they caught a break, they were never able to enjoy it for very long.

Overall Personal Demons was a fantastic book that had all the humor and action I could have ever asked for all mixed into one. I can’t wait to find out what happens next, as soon as I get my hands on a copy of Original Sin.