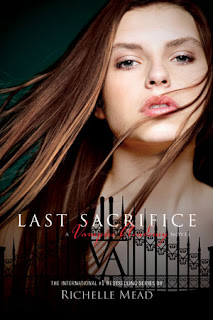 Rose Hathaway has always played by her own rules. She broke the law when she ran away from St. Vladimir’s Academy with her best friend and last surviving Dragomir princess, Lissa. She broke the law when she fell in love with her gorgeous, off-limits instructor, Dimitri. And she dared to defy Queen Tatiana, leader of the Moroi world, risking her life and reputation to protect generations of dhampir guardians to come.

Now the law has finally caught up with Rose--for a crime she didn’t even commit. She’s in prison for the highest offense imaginable: the assassination of a monarch. She’ll need help from both Dimitri and Adrian to find the one living person who can stall her execution and force the Moroi elite to acknowledge a shocking new candidate for the royal throne: Vasilisa Dragomir.

But the clock on Rose’s life in running out. Rose knows in her heart the world of the dead wants her back...and this time she truly is out of second chances. The big question is, when your whole life is about saving others, who will save you?

****SPOILER ALERT!!! DO NOT READ THIS REVIEW IF YOU HAVEN'T READ THIS BOOK OR THE PREVIOUS BOOKS IN THE SERIES!!!****

Last Sacrifice was simply AMAZING. I apologize ahead of time if it seems like I’m rambling but I’m having trouble putting my thoughts into words about this book. I’m always torn between wanting to keep reading and making it last as long as possible when it comes to the last installment of a series. I was happy to be reunited with Rose an her friends once again their adventures never ceased to amuse me.

Not a stranger to trouble, Rose Hathaway now finds herself in more trouble than she has ever been. She is being accused of having murdered Queen Tatiana, a murder she has not committed. Being who she is and having the friends she does, Rose gets the help she needs in order to clear her name. In order to clear her name, Rose and her friends take on most of the Moroi Court and travel across the country to find all the necessary evidence. Ready to do whatever it takes Rose and her friends only have so much time to do what they hope. To get more time what better way than to have Lissa run for Queen of the Moroi?

By this point in the series, I honestly feel like the characters in the books are real people that I could randomly meet in the street. Rose is one of my favorite heroines out there and should she actually exist, I’m sure we would be best friends. In this book, I love her more than ever. Her butt-kicking, sarcasm, and moral code just make me love her that much more. And her friendship with Lissa just seals the deal for me. She would do anything for Lissa and just about anyone else she loves. My only problem with Rose in this book is that she is with Adrian but that can easily be overlooked in the long run. In this book I was really liking the bond between her and Lissa this time around. The two spent a lot of time apart so it gave good insight into what Lissa was thinking and feeling as well as what was going on with everyone that was left behind at Court.


You’ve heard me say this before, Dimitri pretty much drives me crazy. In the other books I didn’t always understand his actions and most of the time those actions confused me and made me angry. But now I love Dimitri more than ever. There is a clear change happening in him throughout the book. And without giving anything away I was way more than happy with the end result. Now if only Dimitri actually existed I would be extremely happy. I am Team Dimitri all the way, but I still love Adrian. The guy sure has a lot of flaws but deep down he has a lot of potential to be a really great guy. I feel like I never really talk about Christian even though I absolutely love him. Most of the time he just makes me crack up with his cynical comments and just his general attitude. He and Lissa really work well together and I’m happy they were able to work everything out.


I often find myself be let down by the last book in a series but this one really didn’t disappoint. The story took me to places I never expected to go. Every time I turned a page I had absolutely no idea what to expect. Each chapter finished on a cliffhanger only making me want to read further, resulting in me reading the whole book in one day and that doesn’t happen to me often. More than anything else, I loved the ending. Everything came to a complete circle, there were no loose ends left to tie up. And the way that was all done made me really happy and had me giggling while getting teary eyed when I read the very last page, read the book and you’ll understand.

Last Sacrifice was an amazing finale to an extraordinary series. Except now that it’s over, it feels like there’s something missing. I can’t wait for Bloodlines, the spin-off series based on some of the minor characters. Hopefully there will be some appearances from my favorite Vampire Academy peeps.