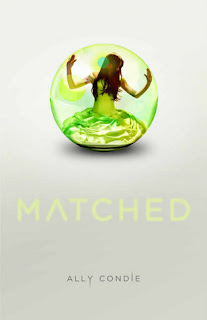 In the society, officials decide.

Who you love. Where you work. when you die.


Cassia has always trusted their choices. It’s hardly any price to pay for a long life, the perfect job, the ideal mate. So when her best friend appears on the Matching screen, Cassia knows with complete certainty that he is the one...until she sees another face flash for an instant before the screen fades to black. Now Cassia is faced with impossible choices: between Xander and Ky, between the only life she’s known and a path no one else has ever dared follow--between perfection and passion.

There was quite a bit of hype surrounding the release of Matched and I was one of those people who was really looking forward to reading the book. The premise for the book sounded really interesting and I love dystopian novels. Basically Matched had everything I loved in a book. As it turns out, Matched lived up to my expectations but not in the way I expected it to. It sort of creeped up on me and I didn’t realized it until the very end.

Characters like Cassia are probably one of the reasons why I love to read dystopian novels so much. At the beginning, Cassia believed in everything she was told to and didn’t even consider the idea of challenging the society’s authority. And then, as it often goes, something happened that made her start to think that maybe she shouldn’t believe and trust in everything she was told. I enjoyed seeing Cassia doubts grow and just her attitude as a whole change as she found out more and more about her so-called perfect society. What made her more interesting to me was also that not only was she doubting the society but she was also doubting her own doubts. It’s not really that I enjoy seeing her struggle but that struggle made her seem more real to me.

I’m honestly torn between Xander and Ky. Both boys have something to offer and throughout the book I found myself going back and forth between them. At first I was all for Xander though at one point he seemed kind of clueless and naive but I ended up being proved wrong at which point my love for Xander was rekindled. Ky on the other hand I didn’t like him right from the start but as his relationship with Cassia evolved, I found myself liking him more and more. I really can’t make my mind up between the two of them, at times I would find myself rooting for both guys at the same time. So for now, I have yet to decide if I am Team Xander or Team Ky...I’ll just stick to loving both.

Like I’ve said, the story sort of creeped up on me. While I was reading the book, I didn’t really find anything particularly special about the story but when I finished it, it just sort of dawned on me that the story was a lot more than I originally thought it to be. It’s a little hard to explain exactly what that feeling was and I think you just have to read the book to understand what I’m trying to say.

Overall, I thoroughly enjoyed Matched. It was a great story that made me stop and think about just how lucky I am to be able to make simple choices in my every day life, things as little as deciding when and what I eat. I look forward to reading the next book in this series, which I believe is due out sometime this year but I may be wrong.