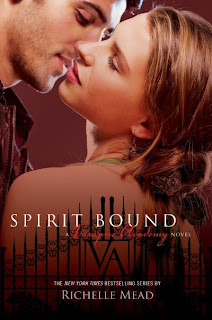 After a long and heartbreaking journey to Siberia, Dimitri’s birthblace, Rose Hathaway has finally returned to St. Vladimir’s--and to her best friend, Lissa Dragomir. It’s graduation, and the girls can’t wait for their real lives outside of the academy’s cold iron gates to finally begin. But even with the intrigue and excitement of court life looming, Rose’s heart still aches for Dimitri. He’s out there, somewhere.

She failed to kill him when she had the chance, and now her worst fears are about to come true. Dimitri has tasted her blood, and she knows in her heart that he is hunting her. And if Rose won’t join him, he won’t rest until he has silenced her...forever.

But Rose can’t forget what she learned on her journey--whispers of a magic too impossible and terrifying to comprehend. A magic inextricably tied to Lissa that could hold the answer to all of Rose’s prayers, but not without devastating consequences. Now Rose will have to decide what--and who--matters most to her. And in the end, is trues love really worth the price.

So most of you have heard me gush over the Vampire Academy series and I will continue to do so in this review. Consider yourself forewarned. I absolutely love these books and as many of you know I am totally Team Dimitri and this has yet to change though I am liking Adrian more and more. But besides my swooning over Dimitri, once again the story was amazing and a lot of what happened it did not necessarily see coming which only made the story that much better. Spirit Bound was simply awesome, much like the other books in the series, so prepare for some gushing on my part.

During her time in Siberia, Rose discovered there may be away to bring Dimitri back, to turn him back to a dhampir. And Rose being who she is, she is prepared to do just about anything to get him back. Only this time she doesn’t do it on her own. She has graduated high school and is following Lissa and their friends to Court to get her official assignment. While waiting for that assignment, Rose sneaks out of Court with Lissa and Eddie and jets off to Alaska to do nothing less than break someone out of jail. Of course with that comes all the usual trouble. But Rose and Lissa do succeed in turning Dimitri back. But of course, like with all of Rose’s plans, even more trouble comes out of this than she thought possible.

You’ve heard me say it before but I absolutely love Rose. She is just such a great character. She has a mind of her own and all things considered she pretty much has her own moral compass too...and it doesn’t really always point north. The lengths she will to go to help her friends are just incredible. Once again she manages to surprise me with every single one of her actions. I mean who in their right mind would break one of their worst enemies out of prison on a hunch that they can help bring someone back to life. Even though Rose technically now only has one guy in her life, she still manages to find herself in the middle of some whacked out love triangles. Adrian is honestly good for her and you can tell that she really cares about him but it’s still not the same as the way it was with Dimitri...heck the way it still is with Dimitri.

Speaking of Dimitri. He essentially drives me crazy. When he’s Strigoi I just want to kill him because he is a major jerk. But at the same time I can’t help but still love him because, well, he’s Dimitri so what else can I do? And when he’s back to being a dhampir he is almost more infuriating. I don’t want to give anything away but he just needs to get over himself and get on with his life. Kind of harsh but if you read the book and are rooting for Rose and Dimitri to be together you will totally get what I mean. And opposite from Dimitri there is Adrian. I have to admit that I am liking him more and more. You can easily tell how much he cares for Rose and that his feelings are genuine. Maybe the reason I’m rooting for Dimitri and Rose so much is because I want Adrian all to myself. Sure he has some flaws, and by some I mean many, but beneath it all there is a really great guy just waiting to be discovered.

The story itself was once again amazing. There is more action than I could wish for and twists and turns every step of the way. Some of it I saw coming, some of it not so much but regardless of all that the story was awesome. I’m not exactly sure how to describe it without giving too much of it away but it is a story you most definitely want to read. And let’s just say the ending will make you want to have Last Sacrifice on hand. It was that good.

To put it in simple terms, Spirit Bound was incredibly awesome. I finished reading it and I immediately sent my brother an e-mail to tell him to forget about getting me Last Sacrifice for Christmas. There was no way I was waiting three weeks to find out what happened next. I’ve read Last Sacrifice and you’ll here me gush about it all in another review soon.