Today I'm taking part in the blog tour for Kim O'Brien's Bone Deep. If you're in the mood for a suspenseful story, then this is the book for you. To give you a little more insight into the story, I've had the pleasure of interviewing its main character, Paige. Keep reading to see what she had to say, to find out more about the book, and for a chance to win a copy of the book.

Your father is a famous archeologist so you’ve always been around archaeology. What do you love most about it?

Paige: Archeologists are obsessed with the prehistory of mankind and I guess I am too. Did you know that 99 percent of mankind’s development occurred within the prehistoric cultures, yet there are no written records? So it’s really exciting to bring something out of the earth that has been buried for hundreds of years and study it, try to figure out what it meant to the people who used it.

Do you see yourself following in your father’s footsteps and becoming an archaeologist yourself?

Paige: Yes, but I’d like to become an anthropologic archaeologist. This would not only let me get involved with the site excavation but also let me study how past societies lived and explore more deeply the cultural aspects of things. Folklores, legends, and myths all fascinate me.

When you were little you made up stories for you and Emily as part of the game you played. How did you come up with all those elaborate stories?

Paige: Creating the stories was easy. All I had to do was think of something really scary and dangerous—something that our parents would have forbidden us from doing if they knew about it. The idea was to scare ourselves silly. We were looking for ways to break into the world of the supernatural and we believed that fear held a special kind of power. If we were frightened enough, we would have enough “power” to cut through that very thin veil we believed separated us from the dead.

What was your favourite story you ever made up?

Paige: I guess the one about the Caymans—dangerous beasts who were half-coyote and half-human. They were sort of like werewolves and came out after dark. They wandered the dearest looking for souls to steal so they could become human again. These Caymans possessed extraordinary powers that could be ours if we could lock eyes with them at night. Emily and I spent hours learning to imitate a coyote’s howl perfectly so we could try to call them to us.

What three things should people know before reading yours story?

Paige: That the truth is not always what you think it is.
That Indiana Jones is a very skewed image of an archaeologist.
That ghosts are real—I’ve seen them. 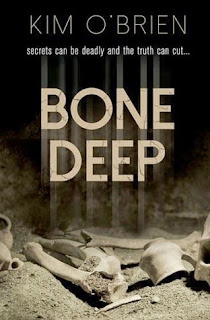 When Paige Patterson travels to Arizona to spend the summer with her archeologist father, she expects answers. Why did her parents divorce? Why did her father choose his career over family? She doesn’t expect to be reunited with her best friend Emily Linton, a girl she has always admired and secretly wanted to emulate, or to find herself falling for the project manager’s son, Jalen Yazzi.

But the summer takes a turn when Emily vanishes. As the police struggle for answers, Paige sets out to find the truth.

The search takes Paige from the Cliffside ruins of prehistoric Native Americans to the Navajo Nation to the horrifying possibility that the answer is much closer to home. Emily, it turns out, was not the only one good at hiding things.

Her father has no alibi for the night Emily disappeared. An intern with the motive insists he’s innocent. And Jalen has some secrets of his own.

Old bones might not be the only things buried in the ruins. As Paige digs deeper into Emily’s disappearance, she realizes that uncovering the truth may cost her everything. Kim O’Brien grew up in an old Victorian house in Bronxville, NY. Her mother loved telling her bedtime stories, especially ones about the ghost in their attic. Kim not only believed the house was haunted but also fell in love with books and the art of storytelling.

At Emory University in Atlanta, Kim earned a B.A. in psychology. She then attained a M.F.A. in writing from Sarah Lawrence College in Bronxville, NY. She worked for many years as a writer, editor and speechwriter for IBM before becoming a full time fiction writer. She lives in Texas with her husband, daughters, and four-legged friend Daisy.

Kim is the author of eight inspirational romances and seven non-fiction children’s books. She loves to hear from her readers and can be found on her website, Facebook and Twitter.