Today I have the pleasure of being part of a very special tour for Cora Carmack's amazing All Played Out (to find out more of what I thought about the book, check out my review). If you've read the book, you know that lists, bucket lists in particular, play an important part in the story. After all, if Nell hadn't decided to make a list of normal college things to experience, she probably wouldn't have met Torres and there wouldn't be a story. And so in honor of Nell's list, myself and other members of Cora's Street Team are sharing our own lists.

And keeping with All Played Out, here are five things (I think) you should do before graduating college.

1. Go to a big sports game. Especially if your school is known for a particular sport.

The school I went to has the best college basketball team in Canada, having won the national championship 11 times in the last 13 years. So they're a pretty big deal as far as college sports go in Canada. But in four years of attending the school, I didn't go to a single one of their games. And honestly, it's one of my biggest regrets. I don't know why I never went to a game. It always looked like everyone who went to games had a fantastic time and school spirit was definitely high. Nothing's stopping me from going to a game. I still live in the same town I went to school. But it wouldn't be the same. So if your school is a BIG DEAL in a sport, then do better than I did and GO TO A GAME.

2. Join a club/committee/group/etc. Get involved, basically.

As obvious, or even cliché, as it might sound, the best way to meet new people is to get involved in SOMETHING. Sure, you can meet people in your classes, but it's not the same as meeting people through a club/committee/group that focuses on a common interest. I didn't really get involved in much of anything in my first two years of school. But my third year, through my job (I was statistics tutor, in case any of you were curious. And yes I know that makes me sound like a total nerd but I've learned to embrace it) I met some of the best people. After two years of doing nothing beyond just going to class, I finally found people who were like me and finally started coming out of my shell some more. And those people ended up being the people I hung out with the most in school. It gave me a place to go when I had downtime on campus between classes. And parties with all those people are some of my best memories (let's just say we were the study hard, party harder type).

I feel like this one is kind of vague, but also not. I went to my fair share of parties while I was in college (see parts of #2) but those parties were always with people I knew either through work or because they were at a friend's house. What I'm talking about here is large scale social events: think homecoming parties, tailgating, frat/sorority parties or pub crawls. Those I never actually went to. The closest I came was going to my school's annual Charity Ball in my sophomore year. And it was a lot of fun. Looking back, it makes me wish I had gone to more of those types of events. You meet people you wouldn't otherwise come across and since alcohol is typically involved, everyone is always more friendly than they would be in other circumstances (I'm a friendly person when I'm sober, but I'm sure I'm not the only one who becomes VERY friendly when she drinks).

4. Try one thing that's outside your comfort zone.

This could literally be ANYTHING. But looking back on my four years in school, I can't really say that I did anything that was outside my comfort zone. It's not that I didn't go out or was particularly sheltered. I just didn't really push myself. Looking back now, I can't necessarily point to one thing that's outside my comfort zone that I wish I had done. But at the same time, I feel like there are some things I missed out on, some things I should have said "yes" to instead of passing. So do better than I did and do something that's outside your comfort zone at least once. You never know what might come of it.

So the town I live in has two pretty big universities. As you might guess, there is some serious rivalry between the two. To the point that we have a not so friendly and politically correct song about our rival school. When you sign up for Frosh Week your freshman year, the first thing you learn is that song. And then you spend the rest of that week singing that song. Loudly. I haven't sung the song since my own freshman year and I can still remember it all (not that is was particularly complicated, but still). So that was sort of our tradition at my school. And though I didn't really have anything against our rival school (a lot of my friends currently go to that school, for that matter) it was just great to have this thing bringing us all together when we were all new at the school. So if your school has a tradition, take part in it. It might seem silly at the time, but it's probably also something that will stick with you.

So those are five things I think you should do before graduating from college. These are based on my own experiences (though I did have to ask for suggestions from friends who are actually still in college) so they might not apply to everyone. Do you have anything you would add to this list? If so let me know in the comments, I'd love to hear what you would add to the list! 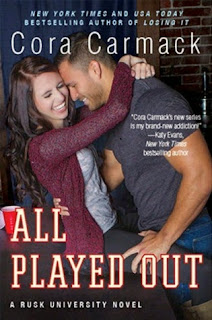 About All Played Out
Amazon / Barnes & Noble / iTunes

First person in her family to go to college? CHECK.
Straight A’s? CHECK.
On track to graduate early? CHECK.
Social life? …yeah, about that…

So Nell does what a smart, dedicated girl like herself does best. She makes a “to do” list of normal college activities.

Rusk University wide receiver Mateo Torres practically wrote the playbook for normal college living. When he’s not on the field, he excels at partying, girls, and more partying. As long as he keeps things light and easy, it’s impossible to get hurt…again. But something about the quiet, shy, sexy-as-hell Nell gets under his skin, and when he learn about her list, he makes it his mission to help her complete it.

Torres is the definition of confident (And sexy. And wild), and he opens up a side of Nell that she’s never known. But as they begin to check off each crazy, exciting, normal item, Nell finds that her frivolous list leads to something more serious than she bargained for. And while Torres is used to taking risks on the field, he has to decide if he’s willing to take the chance when it’s more than just a game.

Together they will have to decide if what they have is just part of the experiment or a chance at something real.

Cora Carmack is a twenty-something New York Times bestselling author who likes to write about twenty-something characters. She's done a multitude of things in her life-- boring jobs (like working retail), Fun jobs (like working in a theatre), stressful jobs (like teaching), and dream jobs (like writing). She now splits her time between Austin, TX and New York City and spends her days writing, traveling, and spending way too much time on the internet. In her books, you can expect to find humor, heart, and a whole lot of awkward. Because let’s face it . . . awkward people need love, too.