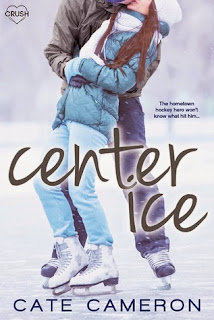 The hometown hockey hero won’t know what hit him…

Karen Webber is in small-town hell. After her mother’s death, she moved to Corrigan Falls to live with strangers—her dad and his perfect, shiny new family—and there doesn’t seem to be room for a city girl with a chip on her shoulder. The only person who makes her feel like a real human being is Tyler MacDonald.

But Karen isn’t interested in starting something with a player. And that’s all she keeps hearing about Tyler.

Corona Falls is a hockey town, and Tyler’s the star player. But the vicelike pressure from his father and his agent are sending him dangerously close to the edge. All people see is hockey—except Karen. Now they’ve managed to find something in each other that they both desperately need. And for the first time, Tyler is playing for keeps…

Karen has always been a city girl and the last thing she wanted to do was leave her city home. But following her mother’s death, she’s forced to move to Corrigan Falls to live with the father she doesn’t know and his perfect family. Needless to say, Karen is less than happy about the situation. The only upside to this small town is Tyler MacDonald, the boy Karen meets on her morning runs. Tyler is the star of the Corrigan Falls hockey team. And as much as Tyler loves the game, the pressure from his father and his agent is starting to eat away at him and make him question if he even wants to be a professional hockey player. His whole life revolves around hockey, but when Karen comes into his life, hockey is the last thing she cares about. To her, it doesn’t matter that Tyler is a star hockey player, she just likes Tyler for who he is. Soon, they discover that they might just be exactly what the other one needs.

I’m a sucker for sports romances, but there doesn’t seem to be as many of them in YA as there are in NA. Or maybe I’m just not as aware of the YA ones. All that to say that when I find out about one, it automatically gets added to my TBR. And that’s how Cate Cameron’s Center Ice found itself in my hands. Well, that and the fact that it was also from a new Entangled imprint that specializes in adorable contemporary romances. Can you say Emilie book? Because it totally was. Center Ice was exactly the read I hoped it would be. But it also went a little deeper than I thought it would. It wasn’t all about the romance and the cuteness that were Karen and Tyler. It also dealt with the idea of grief and finding your place in a new family, as well as the incredible pressures that can be put on teenage athletes. So it was nice to read a story that wasn’t entirely focused on the romance. Though don’t get me wrong, the romance was there and I loved every minute of it. But the story was more than that and that’s what made me really enjoy it as much as I did.

Karen hasn’t exactly had it easy as of late. She just lost her mom and was forced to move in with a family she doesn’t know, even if she’s related to them. If I were in her shoes, I’m not sure I would behave in a much better way. Not that her behaviour was bad, she just had a bit of an attitude toward her new family. But it was great over the course of the story to see her start to adjust to her new life and come to terms with what was happening. Even seeing her start to open to her stepmom. Actually, that’s a relationship I wish had been explored more, but I’ll take what I got. The person Karen was able to be the most herself around though was Tyler. Tyler wasn’t entirely who I thought he was going to be. Honestly, I kind of expected him to be a bit of a stereotypical big-shot, egotistical athlete. But that’s not who Tyler was. Sure, he was aware of the fact that he was a skilled hockey player, but he didn’t let it get to his head. In fact, he was constantly doubting his ability. And with so much of his life (read: all of it) revolving around hockey, it was great to see him be with someone like Karen who couldn’t care less that he was this big hockey player. And Karen and Tyler together were kind of great.

Cate Cameron’s Center Ice was a great sports-themed read. I loved the romance in the story and I’m curious to see what’s going to happen next. I can’t wait to read about some of the other boys on the team!