As part of the blog tour for Witchlanders by Lena Coakley, I have the pleasure of having Ryder, one of the characters from the book, here on the blog answering a few questions. Be sure to also check out the giveaway for a chance to win a Kindle 3. But without further adieu, here is what Ryder had to say!


Where does your hatred of witches and what they believe in come from?

I don’t know that I hate witches. After all, I have a lot of relatives up there in the covens. By all accounts my grandfather, who was a witch, was a good man. But it just irks me the way everyone in our village bows down to coven dwellers as if they have the ear of the goddess herself. And they don’t do any work for it! Since my father died, my sister and I have had the running of our farm, and I can tell you, growing hicca in this rocky soil isn’t easy. And then the witches come along and take one quarter of it for their tithe—one quarter! If they could really tell the future as they claimed—if they could really protect us from our enemies—then maybe I’d think they deserved it. But you have to understand, until recently I’d never seen anything to make me believe magic really existed in the world. I thought that some witches might have convinced themselves they could see the future when they threw the bones, but the others? I thought they were just liars.

Why did you choose to believe in what your mother predicted despite how you feel about witches and what they do?

I didn’t know what to think about my mother’s prophecies. At first I worried she had taken too much maiden’s woe. Some people think that flower helps you to see the future, but really it just drives you mad. Later, it seemed as if my mother’s prophecies had come true somehow. I’m beginning to realize that there are a lot of things I don’t know about the world. But if magic really exists, I’m going to have to rethink everything.

At one point it looked like you were going to kill Falpian. What made you change your mind about him?

Goddess take me if I ever figure it out. He’s a spoiled, rich blackhair and I should have killed him on sight. All my life I’ve been taught to hate his people, the Baen. Twenty years ago they came with their black ships and attacked our two port cities, Barbiza and Tandrass. They killed a lot of Witchlanders, my grandfather included.

But I just had a feeling that Falpian wasn’t as bad as all that. First of all, he had a chance to kill me and he didn’t take it. Maybe he’s just a coward, but who knows, maybe there’s some good in everyone, even blackhairs.

Did you always feel the strong need to protect your younger sisters or did you take up that role after your Fa's death?

Fa seemed so ordinary when he was alive, but everything held together then. We were poor but I never wondered where our next meal was coming from. Fa took all that worry on himself. I never gave a moment’s thought to what a heavy load that was for him, and of course that was how he wanted it. When he died, yes, I guess I tried to do what he’d done, tried to take all the worry of our farm on myself so that my two sisters could have a childhood. I just don’t think I succeeded very well. My mother was no help, I can tell you that.

You say that if your father hadn't died you would have left and gone to sea. Did you want to leave because of the witches or were there other reasons?

No, it wasn’t because of the witches. I always knew I wasn’t meant to be a farmer. I suppose a lot of people have a feeling like they’re meant for something more than their lot. And I suppose that feeling often comes to nothing and they end up doing exactly what their father and their grandfather did. I didn’t want to be like that, though. I wanted to get away and see the world. Now that I think back on it, I think it was magic I was really wishing for.

When you first met him, did you ever think you would have the relationship you have with Falpian?

I still don’t believe it now! Honestly, I still have an irrepressible urge to push him into a lake sometimes. Maybe someday I will.

What did it feel like to find out everything you had ever known and believed in was a lie, especially concerning Aata and Aayse?

To be honest, the history of dead witches never meant much to me, so finding out that Aata and Aayse, the witch prophets, weren’t exactly who everyone thought they were? I didn’t care so much at first. In a way, I admire Aata and Aayse more now that I know who they really were. I’m descended from their followers—possibly from Aata or Aayse herself!—and for the first time I’m starting to wonder what that really means. I think my witch heritage is going to be harder to get away from than I thought.

Thank you so much Ryder for answering my questions. It's always nice to know what is going through somebody else's mind, especially when that person went through what we're talking about.

Answer the video question below in the comments, and you are entered in the Kindle3 Giveaway. Gather up to 15 entries by commenting on each Tour Stop. Open US/Canada. 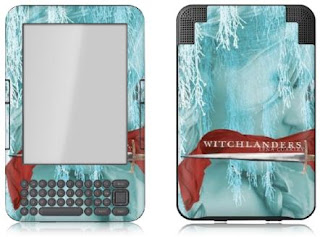 Be sure to also check out the rest of the blog tour! 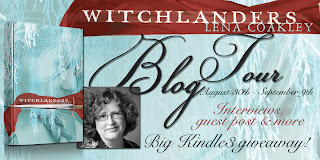