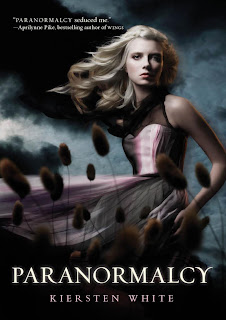 Weird as it is working for the International Paranormal Containment Agency, Evie’s always thought of herself as normal. Sure, her best friend is a mermaid, her ex-boyfriend is a faerie, she’s falling for a shape-shifter, and she’s the only person who can see through paranormals’ glamours, but still. Normal.

Only now paranormals are dying, and Evie’s dreams are filled with haunting voices and mysterious prophecies. She soon realizes that there may be a link between her abilities and the sudden rash of deaths. Not only that, but she may very well be at the center of a dark faerie prophecy promising destruction to all paranormal creatures.

So much for normal.

Ever since it came out last fall, I have heard nothing but good things about Paranormalcy, so I don’t know why I waited so long to read it. What finally did convince me to read it was the fact that the second second book was coming out soon. At any rate, I am more than happy to have finally read it as it turned out to be just as amazing as everyone told me it was.

Life has never been quite normal for Evie. And how can it have it been when for as long as she can remember she has lived at and has been working for the International Paranormal Containment Agency, or IPCA for short. The thing about Evie is that she has an ability that is quite unique, she can see through paranormal’s glamours and that makes her quite valuable to IPCA. Evie has always believed in what IPCA does but when mysterious Lend shows up and is placed in a containment cell, Evie starts to doubt what she’s been doing. And when something starts to kill paranormals, Evie doesn’t know what to do anymore. How is she supposed to solve this mystery and start a relationship with Lend, all the while continuing to look fabulous? What’s a girl supposed to do?

Kiersten White is quite simply an amazing writer. If I hadn’t know it, I never in a million years would have believed this was her first book. To be completely honest, there was not one thing I didn’t like about the book, that’s how amazing it was. Basically, Paranormalcy was unlike any other paranormal book I’ve read. The concept of an agency that deals with containing paranormal creatures is on that I never would have even considered, and that alone would have been enough to keep me reading. The absolutely amazing writing also kept me going. But most of all, what kept me turning page after page was Evie.


I don’t even know how to begin describing Evie. Saying she is unlike any other YA character out there is a gross understatement. She has an incredible voice and she was more than unique. To be honest, she didn’t really strike me as the type of person who would go out and fight paranormals for a living, but I guess with Tasey by her side and a great outfit Evie can do just about anything. I absolutely loved Lend. Despite the mystery that surrounded him at first, you could tell that he was a genuinely good person (or whatever being he actually is). Though I have to admit that the mystery abound him was a large part of why I liked him as much as I did. Plus, he was really good to Evie and you can’t go wrong with someone like that. Reth on the other hand sort of gave me the creeps and I didn’t find him likable at all. But at the same time, that story wouldn’t have worked as well without him.

Paranormalcy was a truly amazing book and established that Kiersten White is an absolutely fantastic writer. It took me on a thrilling ride and I can’t wait to find out what happens next in the sequel, Supernaturally.