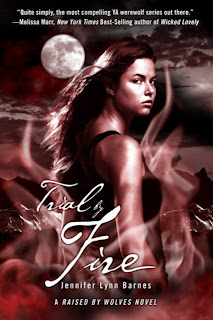 Bryn is finally settling into her position as alpha of the Cedar Ridge Pack--or at least, her own version of what it means to be alpha when you’re a human leading a band of werewolves. Then she finds a teenage boy bleeding on her front porch. Before collapsing, he tells her his name is Lucas, he’s a were, and Bryn’s protection is his only hope.

But Lucas isn’t part of Bryn’s pack, and she has no right to claim another alpha’s Were. with threats--old and new--looming, and danger closing in from all sides, Bryn will have to accept what her guardian Callum knew all along. To be alpha, she will have to give in to her own animal instincts and become less human. And she’s going to have to do it alone.

Bryn faces both the dangers and the joys of love and loyalty in this thrilling sequel to Raised by Wolves.

After I finished Raised by Wolves, I couldn’t wait to get my hands on Trial by Fire and start reading it. I was once again immediately hooked and the book proved just as good if not better than the first one. It was fast paced and more than enjoyable.

Now the alpha of her own pack, Bryn has a lot more on her plate than she ever wanted. And just when everything is going well and everyone is finally getting settled, a wolf from another pack shows up on Bryn’s doorstep. And that can only mean trouble is brewing. But the new wolf may not be the only new threat in town. What on the surface may only appear to be a family of humans with special powers might end up being the greater of the two threats. Now Bryn has to navigate her way through wolf politics as well as deal with the impending danger of a family of psychics attacking her pack. All the while figuring out her relationship with Chase, going to school and figuring out how to be the human alpha to a pack of young wolves.

If I thought the action started early on in Raised by Wolves, it was nothing compared to Trial by Fire. Right from the start we are thrown into the action and there was never a dull moment from then on. This is one of the things I like about the second book in a series, there is less of a need for setting the stage and we can jump right in to what’s important. I have to admit that I liked the story in this book better than the story in the first. It wasn’t quite as slow to start and I liked that it wasn’t only about werewolves. The psychics added something to the story and were the reason behind more than one plot twist. All this to say that the story was quite and interesting and captivating one to say the very least.


Bryn was as lovable this time around and I absolutely loved getting to know her better. One thing I can definitely say about her is that she really doesn’t have it easy. For starters, being one of only two humans and the alpha in a pack of young wolves can hardly be a piece of cake and that’s only the beginning with her. I loved that we got to see more of Ali in this book. For someone who’s a human constantly surrounded by wolves she really knew how to stand her ground and in my opinion, she’s one of the best mother figures in YA, especially considering her situation. Devon was still as great a character this time around and still seems an unlikely candidate to be a wolf. As for Chase, I think he’s the perfect person for Bryn, he really balances her out perfectly. Finally, I really liked Lake, mostly because for someone who spend the majority of her life surrounded by male wolves, she really stood up for herself and didn’t let herself get bullied.

Trial by Fire was a most excellent book, one that I highly enjoyed and left me wanting more. Now I can’t wait to find out what happens next in this series.