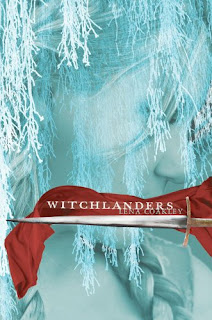 High in their mountain covens, red witches pray to the Goddess, protecting the Witchlands by throwing the bones and foretelling the future.

But it’s all fake.

At least that’s what Ryder thinks. He doubts the witches really deserve their tithes--one quarter of all the crops his village can produce. And even if they can predict the future, what danger is there to foretell, now that his people’s old enemy, the Baen, has been defeated?

But when a terrifying new magic threatens both his village and the coven, Ryder must confront the beautiful and silent witch who holds all the secrets. Everything he’s ever believed about witches, the Baen, magic, and himself will change when he discovers that the prophecies he’s always scorned...are about him.

Until I received a copy of Witchlanders by Lena Coakley for review, I hadn’t really heard anything about it. The premise sounded really interesting and once I started reading the book, I found out that it was a lot more than I originally expected. It was a truly fantastic read.

All of his life Ryder has lived and worked on his family's farm in the Witchlander mountains. In the life he knows, everyone is afraid of the witches and gives them a portion of their crops after the harvest. The only thing is, Ryder has never liked that the witches hold so much power over them. The one thing Ryder believes in, are his mother's predictions, especially when one of them turnes out to be true. Now Ryder starts to doubt everything he has ever been told, especially when it comes to the Baen. Ryder sets out to find answers to all his questions and in the process will find out more truths than he ever thought possible.

I knew next to nothing about Whitchlanders when I first started reading the book. The story is high fantasy, which is something I don't find myself reading very often. So at first I was a little unsure about the story and I couldn't really figure out where it was going. There are two story lines in the book, and until they intersected, I didn't really enjoy the story. But once they two stories came together, I was completely hooked.As someone who doesn't tend to enjoy high fantasy, I found myself to be pleasantly surprised by Witchlanders. The story took me on a crazy adventure and the characters that were in it with me were just as great. I didn't see anything coming and discovered a fantastic new writer in Lena Coakley.

When I first started the book, Ryder and his attitude towards everything kind of annoyed me but at the same time I could see and understand where he was coming from. But as the story moved forward, I liked how Ryder evolved and liked the person he ended up becoming. What I especially liked about the story was seeing the relationship between Ryder and Falpian develop. It wasn't a romantic relationship by any stretch of the imagination, but it was still a really interesting one to see. If only because Ryder and Falpian are complete opposites but so similar at the same time and that made the idea of the relationship between them that much more appealing to me. Falpian himself was also very interesting, mostly because it too me a while to understand who he was and exactly how he fit into the story. But once I had that all figured out, I really liked him. As for the rest of the characters, the majority of them were a bit of a mystery to me, but many of them still played an important part in the story.

Witchlanders was most definitely not what I expected but in a very good way. It took me completely by surprise and I absolutely loved reading the book. Lena Coakley is a fantastic new writer and I look forward to reading whatever comes next from her.