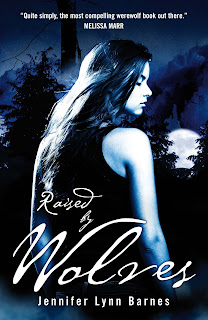 Rescued by the alpha of a werewolf pack after a rogue werewolf brutally killed her parents, fifteen-year-old Bryn knows only pack life and the rigid social hierarchy that controls it. But then she discovers Chase, a newly turned werewolf locked in a cage in her alpha’s basement. Seeing him, Bryn feels a bond unlike anything she has ever experienced--but speaking to him brings up questions about her mysterious past. The hunt for answers will drive her farther from the wolves who raised her, and closer to a truth that will change everything.

For a while I had been hearing that Jennifer Lynn Barnes is a fantastic writer, but I hadn’t read anything by her. So I decided to pick up Raised by Wolves figuring I couldn’t really go wrong with a book about werewolves. Turns out I was right and I loved every minute of it.

Bryn may appear to just be a regular 15-year-old girl but she’s much more than that. Having grown up with a back of werewolves can have quite the effect on you. The rules are not the same and in certain situations your life may depend on those rules. Bryn has always looked up to Callum and always seen him as a gather. Callum was the one who saved her from the rabid wolf who killed her parents hen she was found years old and he’s the one who has taken care of her since then. But what Callum has been telling her might not have always been the truth. When Bryn discovers a boy in a cage in Callum’s basement, she doesn’t know who or what to believe anymore. And can she still trust Callum after he lied to her? And what if the person who’s kept her safe all these years is the one person Bryn can no longer trust?

I can now see why everyone has been saying that Jennifer Lynn Barnes is a fantastic writer. The story she wrote in Raised by Wolves was absolutely captivating and a whole new take on werewolves. Here you have to be born a werewolf in order to be one, and as far as they all know there is no other way to become a werewolf. That alone had me intrigued for the better part of the book. Plus the way Barnes writes just makes you want to keep reading on to find out what happens next. But what I loved most was the voice she gave her characters.

Bryn was an incredible character with an incredible voice. I don’t think the book would have been the same if she hadn’t been the one to narrate it. I loved that she wasn’t boy crazy and was never afraid to stand up for herself or speak her mind. And she was pretty much as stubborn as they come. For that, Ali was probably the best person to balance her out and keep her in check. As the only other human in the pack, she’s the only one who could really understand everything Bryn was going through. Devon was one of my favorite characters, he just didn’t strike me as the type of person who would be a werewolf. Plus he was the best friend Bryn could possibly ask for. Callum sort of puzzled me. Most of the time he seemed to care about Bryn but at other times, his actions seemed to say the total opposite. And Chase was wonderful, but I don’t want to give away too much about him.

Raised by Wolves was an incredible book and I’m glad I finally discovered Jennifer Lynn Barnes. It was such a great book that I pretty much ran out to the bookstore in order to get myself a copy of the sequel, Trial by Fire, and I started reading it right away. What can I say? I was completely hooked.