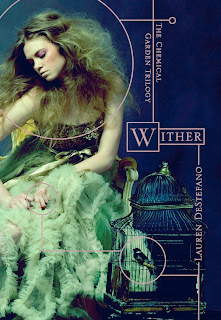 When sixteen-year-old Rhine is taken, she enters a world of wealth and privilege that both entices and terrifies her. She has everything she ever wanted—except freedom. With the help of Gabriel, a servant Rhine is growing dangerously attracted to, Rhine attempts to escape before it is too late.

Wither is one of those books that has been getting a lot of hype for quite some time now. I tend to be a little wary of hype, I’m always afraid the book won’t be able to live up to it. Wither most definitely did not disappoint and lived up to all the hype. I can honestly say that it was one of the best books that I’ve read so far this year.

Rhine knows that it happens all the time, she just didn’t think that it would happen to her. But then she finds herself in the back of a car on her way to be married to a man she’s never met, a man who will also be marrying the two other girls in the car with her. Now a prisoner in her husband’s home, Rhine wants nothing more than to escape and go back to her twin brother in Manhattan. But that may not be as easy as she thought. Now that she knows her sister-wives Cecily and Jenna and has gotten close to Gabriel, a servant, Rhine isn’t sure about anything anymore. Even Linden, her husband, is not as bad as she would have thought. Will Rhine be able to escape before she becomes too attached, before it’s too late?

There’s just something about dystopian novels that draws you in, and that was the case with Wither. The world created by Lauren DeStefano was amazing and captivated me from start to finish. I believed every single aspect of it, to the point that I sometimes thought that I was right there with Rhine. From the scary darkness of the basement to all the different gardens and groves, I could see it all and it felt like I was right there. The concept of the story was also very interesting. I’ve read books where marriages are arranged but never any where girls were sold off to be brides. Just that was enough to keep me interested.

I absolutely loved getting to know Rhine and seeing things from her perspective. She had a great voice and I really enjoyed seeing her work her way through everything. What I loved most was seeing her relationship with Gabriel develop and Rhine trying to figure it all out. As for the other two girls, Cecily always had me either smiling or exasperated. Because of her young age, that behavior was normal but sometimes I just forgot that she was that young. It took me longer to warm up to Jenna but once I did, I started to really like her. The one character I really didn’t like was Housemaster Vaughn, he completely creeped me out.

Wither was a stunning story and by far one of the best I have read so far this year. If I didn’t know better, I wouldn’t be able to tell that this is Lauren DeStefano’s first book. I can’t wait to read what comes next from her.