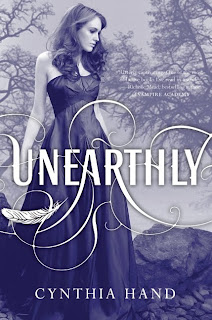 Clara Gardner has recently learned that she’s part angel. Having angel blood run through her veins not only makes her smarter, stronger, and faster than humans (a word, she realizes, that no longer applies to her), but it means she has a purpose, something she was put on this earth to do. Figuring out what that is, though, isn’t easy.

Her visions of a raging forest fire and an alluring stranger lead her to a new school in a new town. When she meets Christian, who turns out to be the boy of her dreams (literally), everything seems to fall in place--and out of place at the same time. Because there’s another guy, Tucker, who appeals to Clara’s less angelic side.

As Clara tries to find her way in a world she no longer understands, she encounters unseen dangers and choices she never thought she’s have to make--between honesty and deceit, love and duty, good and evil. When the fire from her vision finally ignites, will Clara be ready to face her destiny?

UNEARTHLY is a moving tale of love and fate, and the struggle between following the rules and following your heart.

To be honest, the cover is what originally drew me in with Unearthly but then I hear all these great things about the book which only made me want to read it more. Angel stories are always really interesting and let me just say that I absolutely loved this one.

Clara was perfectly happy living her life in California where she had friends and she fit in, for the most part. But then she starts to have visions about a fire and a mysterious boy whose face she has never been able to see. The thing about Clara is that she has angel blood and those visions have to do with her purpose, the thing she was put on earth to do. Now Clara has to move to Wyoming where, according to her visions, she’s supposed to save Christian from a deadly forest fire. But then there’s Tucker, the boy Clara just can’t seem to get out of her mind when she should be focusing all her efforts on Christian. What will Clara choose? Love or her duty as an angel?

I’ve read a lot of books about different sorts of angels or angel-related people, but this was the first one about actual angels. I really enjoyed it to say the least. The whole concept of purpose was really interesting and it really got me thinking about how, in some way, we all have a purpose to fulfill at some point in our lives. And the same goes for choices we have to make between love and duty just like Clara has to in the book. And that was my little philosophical interlude. The other thing that really got me was all the angel stuff. I loved reading about the history of the angels and how there was a sort of hierarchy to them based on the amount of angel blood they had flowing through their veins. And you know, all the different things they could do were pretty neat too...personally, I wouldn’t mind being able to fly.

I loved the mix of characters in the book. I liked how I was finding out about the angel stuff as Clara was, it sort of allowed me to connect with her more. And I could understand her struggle choosing between love and duty. Who would find it easy to choose between Tucker and Christian? Speaking of Tucker, where has he been my whole life?! At first he really bugged me but by the end of the book I just couldn’t get enough of him. Too bad he’s only a fictional character. The other character I particularly liked was Angela, she sort of surprised me. From the initial description we get of her, I really didn’t think she would turn out the way she did. But I’m glad she ended up being who she was.

Overall, Unearthly was an amazing read. You will keep turning pages until there are no more left to turn, and even then you’ll still want more. Or at least I did. So, when can I get more, please?