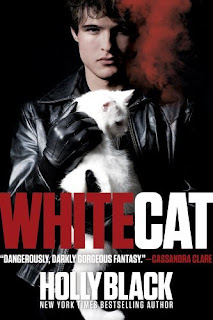 Cassel comes from a family of curse workers--people who have the power to change your emotions, your memories, your luck, by the slightest touch of their hands. Since curse work is illegal, they’re all criminals. But not Cassel. He hasn’t got the magic touch, so he’s an outside--the straight kid in a crooked family--as long as you ignore one small detail: He killed his best friend, Lila. Now he is sleepwalking, propelled into the night by terrifying dreams about a white cat. He also notices that his brothers are keeping secrets from him. As Cassel begins to suspect he’s part of a huge con game, he must unravel his past and his memories. To find out the truth, Cassel will have to outcon the conmen.

Until I read White Cat, I hadn’t read anything by Holly Black (I know, don’t judge). Now I’ve come to realize that I’ve been missing out. White Cat was absolutely amazing and I’m so happy that I decided to pick it up. I wasn’t sure what to expect but I definitely enjoyed this book, more than I thought I would.

Cassel Sharpe is a non-worker in a family full of curse workers. His whole life he’s been trying to fit in, something made even more difficult for someone who believes they murdered their best friend. When he starts sleepwalking and dreaming about a mysterious white cat, Cassel starts being suspicious, wondering if what he knows of his path is actually the truth. When everyone around him seems to be keeping secrets, Cassel will have to find a way to get to the bottom of things. But for someone coming from a family of expert conmen, it may prove to be easier said than done.

Holly Black is a phenomenal writer and I absolutely loved the voice she gave her characters, especially Cassel. There aren’t that many YA books, that I know of, that are told from a boy’s point of view and I love it when I get the chance to read one. Cassel was just a great character not matter how you look at him. Sure sometimes his behavior and judgement class were somewhat questionable, but that what made him more interesting. There was a lot more to him than met the eye to say the least. I won’t even try to go into the Sharpe-Singer family dynamics. I’m sure they all mean well but they often have a weird way of showing it. Cassel’s friends, Sam and Daneca, amused me. They were ready to follow Cassel no matter how crazy the plan. There was a wide variety of characters and that’s what really made the story that much more interesting.

The idea of curse workers is one that is different from most of what is out there. In most books with some sort of magical or supernatural characters, they live in or outside of society without the general public knowing about them. In this case, curse workers are part of society, granted they aren’t the most upstanding members of it, and the general public knows about them. The curse workers are only one aspect of the criminal activity going on here. This is all set against a back drop of mob activity. Let’s just say that with this book, nothing is ever really as it seems. All together, this book was different from most of what I’ve read and I absolutely loved it.

White Cat was a fantastic read, one you definitely should pick up if you haven’t already done so. Holly Black is an absolutely fantastic writer and creates a story that will have you always wanting to know what happens next. You should go read this book, trust me you won’t regret it.