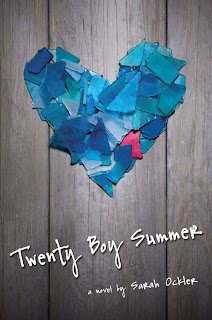 According to Anna’s best friend, Frankie, twenty days in Zanzibar Bay is the perfect opportunity to have a summer fling, and if they meet one boy every day, there’s a pretty good chance Anna will find her first summer romance. Anna lightheartedly agrees to the game, but there’s something she hasn’t told Frankie--she already had her romance, and it was with Frankie’s older brother, Matt, just before his tragic death one year ago.

Beautifully written and emotionally honest, this is a debut novel that explores what it truly means to love someone, what it means to grieve, and ultimately how to make the most of every single moment this world has to offer.

Before I say anything else, I’ll be honest and say that originally the only reason I picked up Twenty Boy Summer was because of the controversy that surrounded it back in September. Regardless of all this, I am happy I decided to read it and I must say that I really enjoyed it. I don’t read as much contemporary fiction as I would like but I am more than glad that I picked up Twenty Boy Summer.

For the past year Anna and Frankie have been dealing with Matt’s death. Matt was Frankie’s older brother but also Anna’s first love and secret boyfriend, not that anyone knew about that part. Now, a year later, Frankie and Anna are preparing for a summer in Zanzibar Bay and Frankie has convinced Anna to just have fun and enjoy a summer of romance. Once in California, Anna makes attempts to please Frankie and soon enough she meets Sam. With Sam Anna is happy and feels things she hasn’t felt since Matt’s death but at the same time she feels guilty and scared that she’s going to forget all about him. And most of all she is afraid Frankie will find out about her past with Matt and what will happen to their friendship once she knows.

At first I had trouble getting along with Anna at first but as the book moved forward I found myself liking her more and more. At the beginning she struck me a little as feeling sorry for herself and always seemed to be living in the past. But as the story moves forward I found myself liking Anna more and more. She truly evolved and she came out a whole new person at the end of the book. I really enjoyed seeing her move forward with her life and coming to terms with everything that had happened in the past and what was happening in the present. By the end of the book I really liked Anna.

Frankie on the other hand, I had a much harder time liking her but I could understand where she was coming from. She never felt real and it always seemed like she wasn’t being completely honest. Like Anna, Frankie had some learning to do and she did do that learning and I enjoyed seeing her evolution. Even though she changed, for the better for the most part, a lot of her actions made me angry but like I said, I could see where she was coming from.

The story itself was quite enjoyable. It was more than just a story about two friends spending a summer at the beach and hooking up with random boys. The story was all about seeing Frankie and Anna come to terms with the past and the present. Relationships, fights and secrets coming out were all involved in the process and were necessary to that process. While reading the book I enjoyed the story and didn’t think much of it. It was only when I was finished that I truly understood what the story really meant and how important it was.

Overall, Twenty Boy Summer was a story I am glad I took the time to read because it is one that needs to be read. I can’t wait to read what comes next from Sarah Ockler.