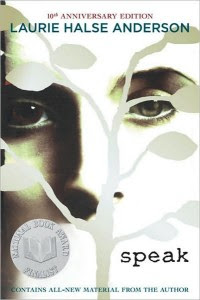 Since the beginning of the school year, high school freshman Melinda has found that it's been getting harder and harder for her to speak out loud: "My throat is always sore, my lips raw.... Every time I try to talk to my parents or a teacher, I sputter or freeze.... It's like I have some kind of spastic laryngitis." What could have caused Melinda to suddenly fall mute? Could it be due to the fact that no one at school is speaking to her because she called the cops and got everyone busted at the seniors' big end-of-summer party? Or maybe it's because her parents' only form of communication is Post-It notes written on their way out the door to their nine-to-whenever jobs. While Melinda is bothered by these things, deep down she knows the real reason why she's been struck mute...

I had heart a lot different things about SPEAK before but it wasn’t until the Banned Books controversy that I decided to finally pick up the book and read it. It was an incredible read, nothing like what I expected and I mean that in the best way possible. This book should most definitely not be banned and I strongly believe that everyone should read SPEAK at least once in their life.

Melinda no longer has friends and she no longer knows how to open up to anyone. She is content staying by herself in her own bubble and doesn’t see the point anymore. Know one knows what happened to her at that party. Everyone just thinks she called the police just to get everyone in trouble. But that is quite far from the truth, a truth that she doesn’t know how to tell anyone. Melinda just goes through school numb, trying to survive and not alert anyone to her situation. But will she be able to find her voice and speak again?

First off, SPEAK is not written in the traditional way. There aren’t really any chapters, just different short sections that relate to particular events. The closest thing I could compare it to is a diary. Melinda reports everything that is going on in her life and in the world around her but everything is said in a really detached manner, as if she isn’t affected by everything happening. Which in a way it is, since she is trying to get away from it all, she’s afraid of what will happen if she starts listening and paying too much attention to all the voices. The way Melinda describes her life makes the story that much more powerful. From the way she tells her story you can really tell that she isn’t going through something easy.

The story itself is one that needs to be read and heard. One of the reason we are so uncomfortable with subjects like rape is that no one is willing to talk about, which is something that needs to change. Obviously it’s not an easy subject and by no strength of the imagination is it a pleasant subject to discuss. I’m not saying that that is what it should become, simply that the only way to do something about the issue is to actually talk about it. In the book, Melinda knows she needs to talk about what happened to her but she doesn’t know how and that is true of many victims of rape. If a book is capable of getting people to open up then all the more power to the book and its author.

I honestly do not understand why anyone would want to ban SPEAK. Laurie Halse Anderson wrote a powerful story on a subject that makes most people uncomfortable, but that alone is not a reason to ban a book. If you don’t want to read a story about a girl trying to go on with life after having been raped then don’t. But, honestly, you should read this book regardless because it really is a book that needs to be read.