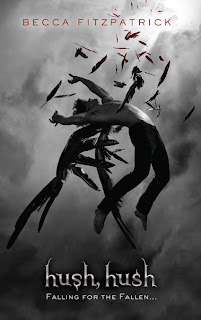 When Nora and Patch are forced together as lab partners, Nora would rather fall to her death than put up with his elusive answers to her questions, his teasing, and his infuriatingly handsome face and hypnotizing eyes. It seems patch was put on earth just to drive her crazy.

But before long, Nora’s defenses start to break down as her curiosity about Patch heats up. Why does he always seem to be wherever she is and know exactly what she’s thinking? How does he know what to say to both attract and repulse her? And what is up with those V-shaped scars on his chiseled back?

As their connection grows stronger, Nora’s own life becomes increasingly fragile. Nora needs to decide: Is Patch the one who wants to do her harm or the one who will keep her safe? Has she fallen for one of the fallen?

I had been meaning to read Hush, Hush for quite sometime now but I was always putting it off. I would see the book at the bookstore and pick it up only to put it back on the shelf. Last month I finally decided to pick up a copy and now that I have read it I find myself slightly stupid. Stupid for having put the book back on the shelf so many times. I had a lot of fun reading it and found myself neglecting food in order to read more and eventually finish the book with my stomach growling in the background. It was that good.

Still dealing with her father’s death, Nora is looking to finish the school year and get a good grade in biology. She has always been partners with her best friend Vee but one day their teacher decides to switch things up and Nora finds herself with Patch as a new lab partner. Until that day, Nora had never really paid any attention to Patch but now she finds herself almost constantly thinking about him. There is something mysterious and dangerous about Patch which only draws Nora that much closer to him. And then there’s Elliott, the new boy at school, who just doesn’t seem right. As much as Vee wants her to be more friendly with him, there is just a bad feeling about Elliott that Nora can’t seem to shake. And then Nora finds out the truth about Patch’s past and everything unravels.

I found Nora to be particularly relatable because I was essentially Nora in high school. The only differences between me and her are that my father is very much alive and, as far as I know, there were no fallen angels in my life. The fact that I found so many similarities between myself and Nora only served to make the book that much more engaging, I could honestly feel like I was part of the story, more so than I usually do. Other than relating to her, I really liked Nora. I particularly liked that she wasn’t completely accepting of her feelings for Patch because she didn’t understand exactly who (or what) he was. The fact that she struggled with her feelings only made them seem that much more real in the end.

Patch is an infuriating character. Don’t get me wrong, I love him but he just drove me crazy. One minute he’ll be acting perfectly normal and the next he says something that just makes you want to roll your eyes, or most often in my case, punch him. Most of the time, you are never actually sure if he means what he is saying which is was really makes him an infuriating character. It would have actually been really interesting to have part of the story being told from his perspective, it would have really helped me understand what was going on in his mind. What made him really interesting, other than the whole mysterious and dangerous part, was how conflicted he was his feelings for Nora. Until the end I honestly didn’t know how it would turn out for them.

I also loved the story. I don’t read that many books about fallen angels but now I may just start to do so more often. The story was fast paced and completely drew me in. Like I said, I sat there reading with my stomach growling for three hours, that’s just how good the book was. You never really know what to expect or what was coming next, with plot twist jumping out at you when you least expect them. Having Nora as a narrator was great, but seeing some parts of the story from Patch’s perspective would have made the book that much more interesting. But don’t get me wrong, the story was pretty amazing as it was.

Hush, Hush completely drew me in and made me feel like I was really a part of the story. It was a fast paced, intriguing and completely amazing read. I cannot wait until I make it to the bookstore to get a copy of the sequel, Crescendo.