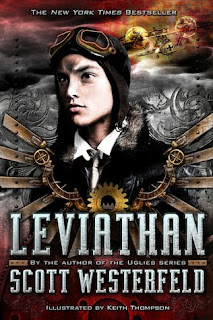 Alek is a prince without a throne. On the run from his own people, he has only a fighting machine and a small band of men.

Deryn is a girl disguised as a guy in the British Air Service. She must fight for her cause--and protect her secret--at all costs.

Alek and Deryn are thrown together aboard the mighty airship Leviathan. Though fighting side by side, their worlds are far apart. British fabricated versus German steam-powered war machines. They are enemies with everything to lose, yet somehow destined to be together.

I had heard about Scott Westerfeld before picking up Leviathan but most of what I had heard had been about his Uglies series. The premise for the book sounded interesting and I just love stories that take place during the World Wars so I figured why not give this book a chance. I can honestly say that it did not disappoint. It was a great story and it was interesting to see the events of the First World War from this perspective.

In the middle of the night, Alek is woken up and told that he must leave immediately because he is in danger. With his fencing master and mechanics teacher, Alek leaves Vienna in a mechanized walker. Alek is told that they must get as far away from Austria-Hungary as possible but no one is telling him why they are leaving or why he is in danger. Deryn wants nothing more than to be able to fly again. To do so she must pass herself off as a boy to enter the British Air Service. She soon finds herself aboard the Leviathan. Soon enough, Deryn and Alek meet and, though their countries are at war with each other, they find themselves becoming friends. But in a continent-wide war, how will this all end?

All the characters in the book are really interesting and the fact that the book is told from a third person point of view makes them all that much more mysterious. Alek was quite intriguing for me. At first I honestly thought he was a spoiled royal kid but the more the story moved forward the more my opinion of him changed. At first he really did seem like he had lived a sheltered life but I liked seeing him change as the book moved forward. He really became an interesting person that wasn’t afraid to do what he wanted. I also really felt for him what with everything that happened to his parents and everything he was going through. It can hardly be easy to leave everything you’ve ever known behind, especially when you’ve be living like a prince.

Deryn amused me. To start with it takes a lot of guts to pass yourself of as a boy, especially in a time when having women part of the military was almost entirely unheard of. She had me giggling so many times with all her expressions and just the things she did. What made her particularly interesting was that the more she got to know Alek the more she had these feelings developing and couldn’t make sense of them. Of course I knew what they were but her confusion just really amused me. She was always so confident and she knew what she wanted regardless of what people would think.

I’m a bit of a history nut and I have to admit that as far as the World Wars are concerned I know a lot more than I should. Even with all the destruction, they are some of my favorite periods of history to study. So reading a book that takes place at that time was more or less perfect for me. I absolutely loved the story and the alternate perspective in the book just made it that much more interesting. I know the story behind the start of World War One backwards and forwards but seeing it this way was interesting and fun. I just know that part of history so well that it never occurred to me to look at it any other way.

Leviathan was a great read. I enjoyed it from start to finish. It was packed with action and plenty of history for those who like that. I can’t wait to start reading Behemoth, the second book in the trilogy, which is currently waiting in my TBR pile.