Waiting on Wednesday is a weekly meme hosted by Jill of Breaking the Spine where book bloggers devote a post to an upcoming book release they are particularly looking forward to reading. 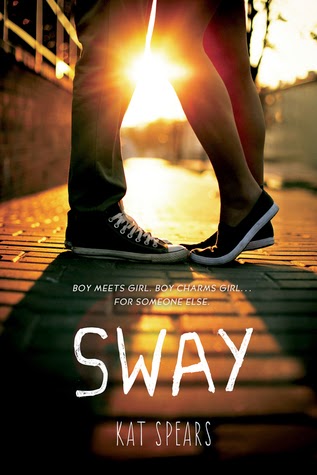 High school senior Jesse Alderman, or Sway as he’s known, could sell hell to a bishop. He also specializes in getting things people want—term papers, a date with the prom queen, fake IDs. It’s all business with Jesse. He has few close friends and he never lets emotions get in the way.

But when Ken, captain of the football team, leading candidate for homecoming kind, and all around jerk, hires Jesse to help him win the heart of the angelic Bridget Smalley, Jesse finds himself feelings all sorts of things. While following Bridget and learning the intimate details of her life, he falls helplessly in love for the very first time. He also finds himself in an accidental friendship with Bridget’s younger brother who’s belligerent and self-pitying after spending a lifetime dealing with cerebral palsy. Suddenly Jesse is visiting old folks at a nursing home in order to run into Bridget, and offering his time to help the less fortunate, all the while developing a bond with this young man who idolizes him. The tin man really does have a heart after all.

A Cyrano De Bergerac story with a modern twist, Sway is told from Jesse’s point of view with unapologetic truth and biting humor. His observations about the world around hi are untempered by empathy or compassion—until Bridget’s presence in his life forces him to confront his quiet devastation over a life changing event a year earlier and maybe, just maybe, feel SOMEthing, again.

Ever since I first heard about Kat Spears' Sway, I have been wanting to read it. First it's a contemporary story. Second, it's a contemporary story from a guy's perspective. And third, it just sounds awesome. Honestly, though, it just sounds like my kind of story and I can't wait to read. And I'm even hoping to be able to snag a copy of the book while at BEA this week.

Sway by Kat Spears will be published September 16, 2014 by St. Martin's Griffin.