The Chapel Wars by Lindsey Leavitt 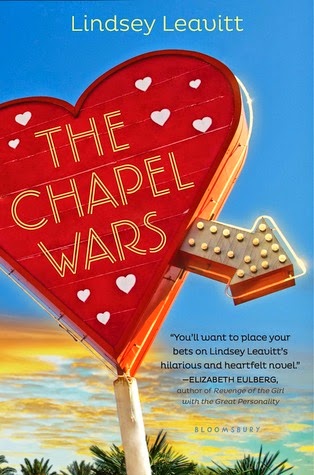 Sixteen-year-old Holly wants to remember her Grandpa forever, but she’d rather forget what he left her in his will: his wedding chapel on the Las Vegas strip. Whatever happened to gold watches, savings bonds, or some normal inheritance?

And then there’s Grandpa’s letter. Not only is she running the business with her recently divorced parents, but she needs to make some serious money—fast. Grandpa also insists Holly reach out to Dax, the grandson of her family’s mortal enemy and owner of the cheesy chapel next door. Not matter how cute Dax is, Holly needs to stay focused: on her groups of guy friends, her disjointed family, work, school and…Dax. No wait, not Dax.

Holly’s chapel represents everything she’s ever loved in her past. Dax might be everything she could ever love in the future. But as for right now, there’s a wedding chapel to save.

As much as I love contemporary, and as much as I try to read every contemporary book I can get my hands on, I had yet to read one of Lindsey Leavitt’s books. Now that I have though, I will be going back and reading the ones I missed out on because I absolutely love The Chapel Wars. It was exactly what I had hoped it would be.

All Holly has ever wanted is to finish high school, go to business school and one day take over running her grandfather’s Vegas wedding chapel. And this does happen, just a lot sooner than Holly ever expected. When her grandfather dies, he decides to leave his chapel to Holly. But there’s also a catch: Holly needs to make some money and fast if she wants to keep the chapel. That’s not all though. There’s also Grandpa’s letter, the one that tells Holly that she needs to deliver a letter to Dax Cranston, the grandson of the owner of the rival chapel. Dax isn’t what Holly expected. For starters, he’s nothing like his horrible grandfather. But Holly shouldn’t be spending time with Dax, she should be focused on keeping the chapel open for business and keeping her grandfather’s legacy alive. No matter what she does though, Holly can’t stop thinking about Dax even if the chapel is what she should be thinking about.

So, The Chapel Wars. What didn’t I love about this book. Until now, I hadn’t read any of Lindsey Leavitt’s other books, but that is soon going to change. To put it simply, I absolutely loved The Chapel Wars. This story had just the right balance between the light and fun, and heaviness. From the start, you’re thrown into the heavier stuff, what with the book pretty much opening with the reading of a will and a funeral. But even with all of that, there was also humour injected in the story right from the start. So while I felt like I should feel back for what Holly was going through, I couldn’t help but want to smile at all the craziness that was happening through it all. And craziness there was. But I guess when you’re dealing with Vegas wedding chapels, it’s to be expected. Beyond the mix of craziness of the wedding business, this story was also about grief and learning how to move on. That’s what Holly had to learn over the course of the story and by the end, she had. But it wasn’t just about Holly learning to move on, it was also about everyone else learning to move on from what had happened in the past, and that of course included Dax. And of course where Dax and Holly are involved, that also means romance, and I personally loved that romance in all its imperfection.

Holly is a very goal-driven person. Case in point, she’s been working her whole like to take over her grandfather’s wedding chapel. Because of that, she hasn’t really taken the time to really get to know who she is outside the wedding chapel. But over the course of the book, she starts to figure it out and I loved getting to know her as she got to know herself. Holly was also kinda unusual, but I really loved her. There were so many aspects of her personality I could relate to and that made me enjoy her story that much more. Of course, a large part of Holly in this story was who she learned to be with Dax. And Dax was pretty great, if you want my honest opinion. He was pretty much the complete opposite of who I expected him to be. I don’t really know why, but as I started reading I had this image in my mind of who Dax was going to be. But he turned out to be someone completely different, and I loved him for it. Dax wasn’t perfect, not by a long shot. He was dealing with his own grief and because of that he wasn’t always acting in the most intelligent ways. But at the same time, it made it so him and Holly could be really good together, helping each other through their respective grief. So basically, all that to say that I loved Holly and Dax together.

In case it wasn’t clear by now, I really loved Lindsey Leavitt’s The Chapel Wars. It was just the right mix of fun and heavy, just how I like my contemporary stories to be. You can be that I will now be going back and checking out Lindsey  Leavitt’s other books. If they’re anything like The Chapel Wars, then I know I’ll love them.