Today I have the pleasure of being part of the blog tour for Flicker & Burn by T.M. Geoglein. I loved Cold Fury when I read it last year so I'm excited to see where Sara Jane goes in this story. In the meantime, I have Sara Jane here on the blog today to answer a few questions, so be sure to keep reading.

Sara Jane, you recently discovered that your family is deeply involved with the Chicago Mob. What was your initial reaction?

Shock is too small of a word. Flabbergasted, I guess, which became disbelief, than acceptance, and then betrayal. I love my parents, okay? Let’s be perfectly clear about that. But they lied to me for a long, long time and it has caused irreparable harm to them, my brother, and me.

After making that kind of discovery, how you deal with it all? Was there anyone you could talk to about all this information?

I haven’t had time to deal with it, to be honest. Almost from the moment I figured it out, someone – masked freaks, cops, now these red-eyed creatures – have been out to get me. Without my best friend, Doug, to talk to, I’d lose my mind. Ah, who am I kidding? I am losing my mind, piece by piece…

From what was in the journal you found, you seem to have something in you that makes you different. Have you been able to find out more about what that is?

Cold fury – ghiaccio furioso, as it’s called in Italian – allows me to channel the deepest fear of an adversary and turn it back on himself until he’s so terrified, he’ll do my bidding. But there are other components to it, as well – things I’m just learning about that are much more powerful and dangerous.

You were recently able to see your little brother. Do you have any more information you can share on what happened to your family on that night?

I wish I did. You have no idea how hard I wish I knew more. But trust me – I’ll find out, no matter how many bones I have to break.

Would you have any tips to give to anyone who finds themselves in a similar situation?


Here is your chance to win one of three signed copies of Flicker & Burn or special art bookmarks. All you have to do is enter using the Rafflecopter form below. Giveaway is INTERNATIONAL.
a Rafflecopter giveaway 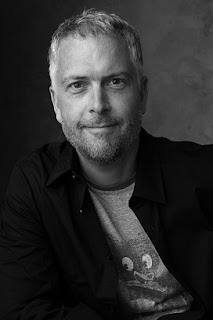 T.M. Goeglein began his career as a writer of print and television ads for a host of advertising and media companies. As a screenwriter, he created both original scripts and worked as a script doctor for several production companies in Los Angeles. He was an original contributor to the Huffington Post "Living" section, and continues to write for both the national edition and Huffington Post Chicago. Read T.M. Goeglein's stories on the Huffington Post.

His debut novel, COLD FURY, will be published by Penguin/Putnam in 2012 and is the first in a trilogy; he's currently working on the second book. He lives in Chicago with his wife, Laura, and two young children. 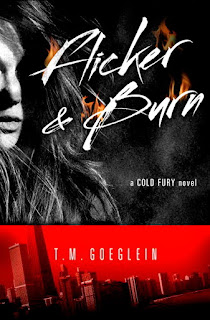 Sara Jane Rispoli is still searching for her missing family, but instead of fighting off a turncoat uncle and crooked cops, this time she finds herself on the run from creepy beings with red, pulsing eyes and pale white skin chasing her through the streets in ice cream trucks; they can only be described as Ice Cream Creatures. They're terrifying and hell bent on killing her, but they're also a link to her family, a clue to where they might be and who has them.

While she battles these new pursuers, she's also discovering more about her own cold fury and more about the Chicago Outfit, how the past misdeeds--old murders and vendettas--might just be connected to her present and the disappearance of her family. But connecting the dots is tough and time-consuming and may finally be the undoing of her relationship with the handsome Max--who's now her boyfriend. But for his own safety, Sara Jane may have to end this relationship before it even really starts.

Her pursuers who've shown her her mother's amputated finger and the head of the Chicago Outfit who's just whistled her in for a sit-down make a romance unthinkable. The only thing that matters is finding her family and keeping everyone she loves alive.