How (Not) to Find a Boyfriend by Allyson Valentine 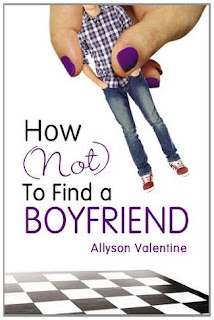 A funny and smart romantic comedy about getting the guy…and finding yourself.

Sophomore Nora Fullbright is the most talented and popular new cheerleader on the Riverbend High cheer squad. never mind that she used to be queen of the nerds--a chess prodigy who answered every question first, aced every test and repelled friends at every turn--because this year, Nora is determined to fully transition from  social pupa to full blown butterfly, even if it means dumbing down her entire schedule. But when funny, sweet and very cute Adam moves to town and steals Nora's heart with his ultra-smarts and illegally cute dimple, Nora has a problem. How can she prove to her way into Adam's classes that involves her classmates, friends--and her older brother Phil's award-winning AP history paper. But soon, Nora can barely keep track of her trades, and struggles to stay in control of her image.

In the end, the only thing that can save Nora is a chess tournament--that she has to compete in wearing her cheerleading uniform. Can she prove to everyone that she can be both a butterfly and a nerd?

Allyson Valentine has created a story so full of enamoring characters, pitch-perfect humor, and delightfully frustrating romance that it will leave you cheering. Great for fans of Stephanie Perkin's Anna and the French Kiss, Susanne Colasanti and Sarah Dessen.

Anyone who knows me, knows just how much I love anything contemporary. In fact, it's almost become a bit of a running joke with my friends. All that to say that I'll read, and most likely enjoy, just about any contemporary story. And that's just how I felt about Allyson Valentine's How (Not) to Find a Boyfriend.

Nora Fullbright is smart. Like the kind of smart that can recite facts about pretty much anything. But Nora also happens to be one of the most talented cheerleader on her high school's cheerleading squad. The question though, is how can Nora be both girls? She thought she could get away with hiding just how smart she was, but when Adam shows up in town, the game changes. Because if Nora wants to win Adam's heart, she's going to have to prove she's more than just a cheerleader.

When I first read the synopsis of How (Not) to Find a Boyfriend I thought it sounded like a fun story. After having read the book, I can say that that's exactly what I got. The story Allyson Valentine wrote in this book was exactly what I needed at the time I read it. The story grabbed my attention and it didn't take long before I was pulled into the story filled with cheers and chess strategy. I really enjoyed the way the story was presented, like the plot was a chess match and Nora had to calculate her every more. In a sense, it added a layer to the story. Not that this was a very deep story, but it was still nice to get more out of the story than I originally thought I would.

Here's the thing about Nora, I liked her well enough but the way she hid so much about herself bugged me. She was super smart but she wanted to be part of the popular crowd and she wanted to fit in with the rest of the cheerleaders. As much s there were moments where I could relate to Nora, it annoyed me a little that she had to dumb herself down for her friends to accept her. Until Adam shows up and complicated things. But at least she went for the boy who would appreciated her intelligence. Because, to be honest, Jake didn't do anything for me. Adam was made more interesting by the fact that he had something to offer beyond good looks and athletic ability. And he made it so Nora stopped hiding her intelligence.

Though I may not have been super impressed by the characters, I still really enjoyed How (Not) to Find a Boyfriend. Allyson Valentine wrote a fun story. If you're looking for a "pick-me-up," then I suggest giving this book a try.