As many of you may have heard, there is a recently published article (find the full article here) about certain YA books that is causing quite the uproar. Authors, readers and bloggers have been voicing their opinions on Twitter and their blogs about whether or not Dr. Wesley Scroggins, the author of the article, is right in suggesting the banning of these books. Obviously everyone is quite angry about this and I have to agree with them. People who work to ban books annoy me to no end.

I’ll be honest from the start, I haven’t read Speak by Laurie Halse Anderson or Twenty Boy Summer by Sarah Ockler but they have both jumped to the top of my TBR pile. Even if I haven’t read either of the books, I know enough about them to know the accusations against them are ridiculous. Who in their right mind would call someone getting raped “soft pornography”? If this is how Scroggins views rape, then he’s the one with the problem. And when he mentions “drunken teens also [ending] up on the beach, where they use their condoms to have sex” in Twenty Boy Summer, I’m not sure where there actually is a problem. Would he rather unsafe and unprotected sex be advertised?

I honestly don’t understand why some people think they can ban books and no one is going to say anything about it. Who do they think they are, believing they know what’s appropriate for some people to read? This man is obviously deluded if he thinks the teens who read these books don’t know about issues of rape, sex, and drunken parties. Even if they didn’t affect me directly I knew all about them. Just because I read about something doesn’t mean I’m immediately going to go out and do what I just read about and I’m sure most people feel the same way. It’s really naive to think that people are that easily influenced.

In my opinion, there is nothing wrong with books that are more explicit or graphic. If you don’t want you or your kids to read them, then don’t but don’t do anything that’s going to stop others from reading them because that’s just wrong. There are some great books out there that can explain things that parents don’t feel comfortable explaining or just don’t know how to explain. So many times I’ve found answers in books that I couldn’t find anywhere else. Even my parents turned me to books when they weren’t sure how to go about explaining something to me and I see absolutely nothing wrong with that. It would be really stupid to stop others from being able to go to books to get their own answers.

At least half, if not more, of the books I’ve read in my life could probably be banned for some reason or another. I also own many books that have been banned in parts of the world. But those are also some of the best books I’ve read in my life. So don’t ban books just because you’re not comfortable with them, you could be preventing someone from reading what could be their favorite book.

Think about this, are you really making people happier when you’re banning books? Or are you just making so many more people angry? 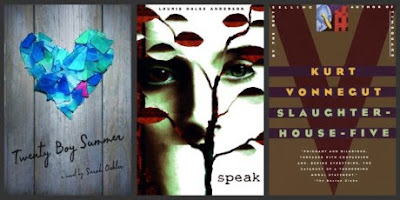