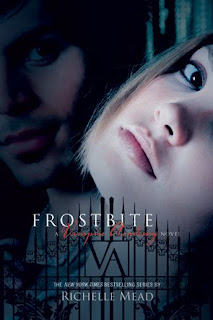 Lissa Dragomir is a Moroi princess: a mortal vampire with a rare gift for harnessing the earth’s magic. She must be protected at all times from Strigoi; the fiercest vampires--the ones who never die. The powerful blend of human and vampire blood that flows through Rose Hathaway, Lissa’s best friend, makes her a Dhampir. Rose is dedicated to a dangerous life of protecting Lissa from the Strigoi, who are hell-bent on making Lissa one of them.

Rose has serious guy trouble. Her gorgeous tutor, Dimitri, has his eyes on someone else, her friend Mason has a huger crush on her, and she keeps getting stuck in her best friend Lissa’s head while she’s making out with her boyfriend, Christian.

Then a nearby Strigoi attack puts St. Vladimir’s on high alert, and the Academy whisks its students away on a mandatory holiday ski trip. But the glittering winter landscape and posh Idaho resort only provide the illusion of safety When three students run away to strike back against the deadly Strigoi, Rose must join forces with Christian to rescue them. Only this time, Rose--and her heart--are in more danger than she ever could have imagined...

I was glad that I had Frostbite waiting for me when I finished Vampire Academy because I definitely wanted to know what was going to be happening next. This book was as good a read as the previous one and made me that much more happy that I finally decided to pick up this series. I have to admit, that I liked Frostbite better than the first book in the series, I don’t know how to explain it exactly, but this one did something that just had me wanting more from start to finish.

Rose thought the only thing she had to worry about was her feelings for her mentor Dimitri but a Strigoi attack nearby changes all that. Not only is everyone on high alert but she also has more boy troubles than she originally thought. Dimitri seems to be interested in someone else, her good friend Mason is crazy about her but she doesn’t care about him that way and to make things worse she keeps getting stuck in Lissa’s head whenever she’s making out, or more, with her boyfriend Christian. Thing should be interesting for Rose as the Academy students are sent to a ski resort in Idaho as a way to keep them safe from more possible Strigoi attacks.

What I like about series is how you can see the characters change throughout each of the books. I already liked Rose at the end of Vampire Academy, but now I like her even more. You can really see how much she’s changed from the first to the second book, and most of these changes are for the best. I love seeing her struggle with her boy situation not because I want to see her struggling but because I’ve been in her situation before. Well, if you take out the part about getting stuck in your best friend’s head when she’s getting hot and heavy with her boyfriend. But that aside, I have totally been in her position. Rose isn’t completely changed, she still has that impulsive, sarcastic and reckless side to her that makes me crack up every so often. My feelings about Rose being a great female lead character have only been reinforced. I liked Lissa better this time around, she was able to stand up for herself and we see a whole new side of her appear and I really liked seeing that happen.

Dimitri still sounded pretty amazing in this book too. You can tell that he really cares about Rose but sometimes his words and his actions don’t really match up. But by the end of the book he makes up his mind on many things and I only like him that much more by that point. Mason was still there, still really amusing and still crazy about Rose. I liked him more in this book than the previous, but that might just have to do with the fact that we learn more about him. I loved finding out more about him and I just got really attached to him, to the point that he almost made me cry towards the end of the book. Christian I liked a lot more than I did in Vampire Academy, you can really tell he cares about Lissa and I loved seeing the relationship between him and Rose develop.

Overall, I have to say I liked Frostbite a lot more than Vampire Academy. The story got moving faster and there were different sub-plots that made it that much more interesting to read. The story was fast paced and right from the start there was a good deal of action. I’m saying the same thing I said when I finished the first book, I’m glad I bought the first four books all at once because I started Shadow Kiss as soon as I finished Frostbite.