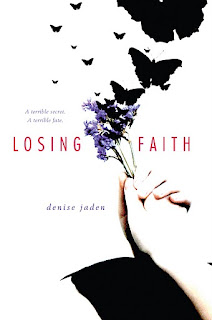 When Brie’s sister, Faith, dies suddenly, Brie’s world falls apart. As she goes through the bizarre and devastating process of mourning the sister she never understood and barely even liked, everything in her life seems to spiral further off course. Her parents are a mess, her friends don’t  know how to treat her, and her perfect boyfriend suddenly seems anything but.

As Brie settles into her new normal, she encounters more questions than closure: Certain facts about the way Faith died just don’t line up. Brie soon uncovers a dark and twisted secret about Faith’s final night...a secret that puts her own life in danger.

I’ll be honest, the main reason I originally picked up Losing Faith by Denise Jaden was because it was part of the Contemps Challenge. That’s not to say that the book didn’t sound interesting from the description, because it totally did and as it turns out the book was actually really good. I wasn’t really sure what to expect from the book because I hadn’t looked that much into it and it had only just come out when I began reading it. I’ll admit I was uncertain about the book at first, but as I kept reading I just liked it more and more and by the end I just loved it.

Brie has always been the “bad” sister, what with Faith being all perfect and super involved in church and youth group. Basically, Faith is the perfect daughters all parents dream about having. That is until she dies suddenly Brie finds herself in the position long held by her sister. Brie’s life turns upside down: her parents are a mess, the guy she thought loved her may not be all that into her, and her friends just don’t know how to approach her anymore. Brie finds herself becoming friends with the last people she ever expected to be friends with and the more she looks into it, the more there seems to be something off about the night her sister died.

Brie sort of creeped up on me. I wasn’t sure about her at first but as I was reading, I found myself liking her more and more. It’s really great to see her evolution throughout the book. She went from being a a teenage girl trying to find out where she fit in and ended up being strong and knowing exactly who she was. Even if she wasn’t physically there, it was also great to see Brie’s relationship with Faith changed. Despite Faith being dead, by the end of the book Brie was closer to her sister than ever. Brie was truly great once I got to know her and wished I could have spent more time with her.

Brie’s friends amused me more than anything else. From the start I could pretty much tell that things weren’t going to work out with Dustin and that Amy wouldn’t turn out to be as good a friend as Brie made her sound. But when Tessa and Alis came in, I liked them from the start. Tessa had me laughing many times and shaking my head the rest of the time. The things the girl thought of, just had me completely wondering how she even came up with those ideas. Alis was different, I liked him pretty much right away and that might have had something to do with him being all mysterious at first. But as I found out more about him, I could tell that he was just a good guy trying to do the right thing...and for once I wasn’t totally going for the bad guy.


At first, I wasn’t completely sure about the whole religious aspect of the book but it turned out it didn’t really bother me by the end. It wasn’t really what was important about the story. The focus was on Brie trying to figure out what had happened to Faith and getting to know her better through her death. The way the story was set up, I could see some of the things coming but a lot of it took me by surprise which is what I like books to do.

Losing Faith was a great read and, I’ll be honest, I enjoyed it a lot more than I originally thought I would. It was a great story about love and loss but didn’t fall into all the clichés that are normally associated with those two subjects. Now I can say that I can’t wait for whatever comes next from Denise Jaden.