Outside the Lines by Lisa Desrochers 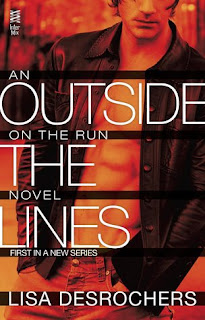 As the oldest son of a Chicago crime lord, Robert Delgado always knew how dangerous life could be. With his mother dead and his father in prison, he’s taking charge of his family’s safety—putting himself and his siblings in witness protection to hide out in a backwater Florida town.

Fourth grade teacher Adri Wilson is worried about the new boy in her class. Sherm is quiet and evasive, especially when he’s around his even cagier older brother. Adri can’t help her attraction to Rob, or the urge to help both of them in whatever way she can.

But the Delgados have enemies on two sides of the mob—their father’s former crew and the rival family he helped take down. It’s only a matter of time before someone finds them. And it Rob isn’t careful, Adri could end up in the crossfire…

There is nothing I love more than rediscovering authors I had sort of forgotten about. With so many books coming out all the time, it can be difficult to keep track of which author’s books are coming out when. But reading Outside the Lines has reminded me that I love reading Lisa Desrochers's stories.

Rob Delgado is willing to do whatever it takes to keep his family safe. After a hit man breaks in to his family's home in Chicago, Rob rounds up his siblings and places himself and his family in the witness protection program. But Rob wants revenge and he wants to take back what is his. What Rob didn't count on was Adri Wilson, his younger brother's teacher and the one thing he can't have: a distraction. Adri is determined to find out what is going on with Sherm and his older brother Rob, and to find a way to help them. But the more she finds out, the more Adri wonders what the brothers are involved in. And despite everything she knows, Adri can't seem to fight her growing attraction to Rob. Rob knows better than to get involved with Adri, especially when so many people want him down. But letting Adri in might be the one thing that can save him.

I discovered Lisa Desrochers as an author when I first started blogging almost six years ago. At the time, the first book in her Personal Demons had just come out and I got completely hooked on the series. To this day, that trilogy remains one of my favourites and is always one I refer to when I want to give someone an example of a love triangle done right. But between when the final Personal Demons book came out and now, I hadn’t read anything by her. Even her A Little Too Far NA series. So when I heard about Outside the Lines, I knew it was time to rectify the situation. Even if this wasn’t a book by an author whose previous work I had loved, I would have been intrigued by the mafia concept alone. There’s just something about books where everything isn’t black and white when that always manages to pull me in. And that’s definitely what happened with Outside the Lines. Once I started reading, I was pulled in the story and wanted to find out what had made it so Rob and his family had to enter Witness Protection, whether they were truly safe away from everything that caused them to go on the run, and, especially, how Adri would fit into it all. And for most of the book, the story kept me guessing in more than one way. And even by the end, I still don’t have all the answers I was hoping to get which makes me excited about reading the sequel, Over the Line.

Morally ambiguous characters are always fun to read about, which is what made Rob so interesting to me. Here was this guy who cared deeply about his family and would do anything to keep them safe. Except what he sometimes chose to do in order to keep them safe didn’t always fall on the good side of the law. So often while I was reading, I was torn when it came to Rob and his behaviour. I could tell that his heart was in the right place but at the same time, it felt like he was making just about the stupidest decisions he could possibly be making. But the reasoning behind those decisions was perfectly in line with everything he’d known in his life. It made me want to smack him sometimes. But also, I have to have some respect for someone who’s so fiercely determined to protect his family, even at the cost of his own happiness. And that’s where Adri comes in. Honestly, I wasn’t sure how I was going to feel about Adri at first because she just came across as so innocent. Even though that was true to some extent, the more I read I also discovered that there was a lot more than that to Adri. As innocent as she might have been, she wasn’t afraid to go for what she wanted and there was very little that could change her mind once it was made up. In a way, she and Rob balanced each other out: where he always saw the worse in people and situations, she would see the best. So the two of them together just really worked and it made me want to root for them.

Outside the Lines reminded me of why I love reading Lisa Desrochers's books. It was a sexy story with just the right amount of intrigue and action. And I can't wait to see what's going to happen next to the Delgado family in Over the Line.

Email ThisBlogThis!Share to TwitterShare to FacebookShare to Pinterest
Labels: INTERMIX, LISA DESROCHERS, NEW ADULT, ON THE RUN SERIES, OUTSIDE THE LINES, REVIEW