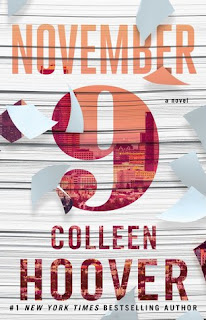 Fallon meets Ben, an aspiring novelist, the day her scheduled cross-country move. Their untimely attraction leads them to spend Fallon’s last day in L.A. together, and her eventful life becomes the creative inspiration Ben has always sought for his novel. Over time and amidst the various relationships and tribulations of their own separate lives, they continue to meet on the same date every year. Until one day Fallon becomes unsure if Ben has been telling her the truth or fabricating a perfect reality for the sake of the ultimate plot twist.

In the last couple of years, Colleen Hoover has easily become one of my favourite authors, one whose books I will automatically buy no matter what they are about. And those books alway manage to hit me right where it hurts in the best way possible. And it was no different with November 9.

Fallon never planned on falling in love at eighteen. Her plan was to move across the country and find herself before she fell in love with someone else. But on the day before she’s supposed to move, Fallon unexpectedly meets Ben and she considers changing her plans. But after spending her last day in L.A. together, they make a deal: for the next five years they’re going to spend November 9 together but continue living their own lives every other day of the year. And if after five years that attraction and those feelings are still there, then they will start their lives together. But not before that. But can you really know someone when you only spend one day with each year?

Until about a week ago, I thought I knew which of Colleen Hoover’s books was my favourite (Maybe Someday for those interested), but then I read November 9 and that changed. It’s one of those things. Every time I pick up a book by Colleen Hoover, I know it’s going to be emotional, I know it’s going to hurt at times, and I know tears are pretty likely to appear on my face. The extent to which all those things will happen just depends on the book and the story. So I had certain expectations when I started reading November 9 and I can now say that those expectations have more than been surpassed. This book is officially my new Colleen Hoover favourite. Once I started reading, I just couldn’t stop. And every time I thought I was done getting punched right where it hurts (in a good way, of course), the hits just kept on coming. I was a mess of tears and feelings by the time I finished and I didn’t know what to do with myself. Or how I was supposed to pick up another book to read after this one. No matter what I say, it’s just not going to come close to doing November 9 justice. Just know that you should have tissues (and lots of them) on hand when you decide to read November 9.

The interesting thing about November 9 is that because of the way the story is told, you never really get a full picture of who Fallon and Ben are. Admittedly by the end of the book, I had a pretty good grasp on who they were but it still took a while to get there. That’s what happens when you only see someone for one day each year. That’s how it was for me as the reader, and that’s what it was like for Fallon and Ben themselves. And it made their story that much more interesting to read. And when everything was revealed it was that much more powerful. Did I mentioned I cried a lot while reading? Well, In the last third of the book that was all Ben’s fault. Overall, though, Fallon and Ben, as much as they gave me a lot of feelings and were responsible for a lot of my tears, they were really fun people to read about. In the first few chapters I couldn’t help the huge smile on my face while I was reading because they were just so adorable and their banter was perfect. And the more I read about them, the more I loved them. And the more I loved them the more I was scared of what was going to happen to them. Because let’s be real here, this was a Colleen Hoover book and we all know what she does to her characters. Even when it all ends well, it hurts to get there.

Colleen Hoover’s November 9 was so much more than I had hoped it would be. This book made me smile, it made me cry, and it made me feel every other emotion in between. Even though this is now my favourite Colleen Hoover book and I don’t know how anything else can possibly compare, I can’t wait to read whatever she writes next.