So I absolutely love series. There's just something about being able to follow a story and its characters over the course of multiple books. Some of my favorite books are parts of series and sometimes the fact they are part of series is what makes it so I like them so much. But there is a downside to series. It seems to me that books in series come out faster than I can read them. As a result I am behind on so many awesome series that I actually really love. To remedy this, I decided I would challenge myself to catch up on some of the series I am behind on over the course of the next year. And I figured, why not encourage other people to do the same. So after many discussions with the wonderful Ciara from Lost at Midnight Reviews, we have come up with the Series Catch-Up Challenge.

The Details:
- Runs from January 1, 2013 - December 31, 2013
- Goal is to catch up on as many series as possible
- Two ways to meet your goal: number of books you've read to catch up series/number of series you've caught up on.
- On the first of each month there will be a post here and at Lost at Midnight Reviews so you can link up your reviews. For every review you link, you get one entry into a monthly giveaway.
- There will be a big giveaway at the end of the year.

I know I'm excited, just looking at my bookshelf I can count 21 series that I need to catch up on, some I've started, some I haven't started but just own all the books. I'm hoping to definitely finish some or catch-up with others so I will be ready for the release of the next title.

So if this is something you are interested in, be sure to sign up below and tell everyone what series you are hoping to catch up on. If you have any questions, just e-mail me (emiliebookworld@gmail.com) or talk to me on Twitter (@emiliebookworld).

(Sign-ups appear here and at Lost at Midnight Reviews.)

If you want to show you are participating, grab one of the graphics below! 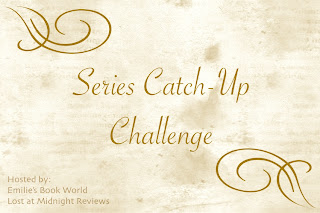 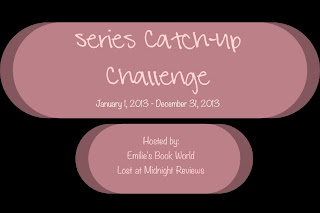 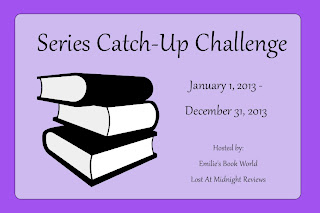