Today I have the pleasure of having Mary Lindsey, author of the upcoming Shattered Souls, here on the blog to talk about where the inspiration came from for the setting of the story. So without further ado, here is what she had to say.

The Great Storm of 1900: Photographic inspiration for Shattered Souls


I’m a visual person, which affects how I learn and write. Sometimes an idea just pops into my head, but usually I’m inspired by a place, object or a photo. 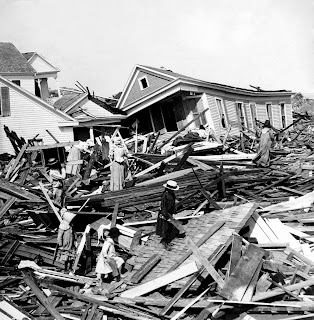 There’s something about this photo that really got to me. Perhaps it is because most of the pictures I’d seen were of men looking for dead bodies or cleaning up the debris, while this one is of children and women looking for something—anything they recognize as valuable, useful or familiar.

It also reached my heart because the child in the white hat and black dress is standing on a piece of a roof that most likely had served as a life raft the night before when the water was up over the housetops.

This photo crystallized for me the dismal truth that despite the largest loss of life from a natural disaster in this country’s history, people still had to pick up the pieces and survive.

Thank you, Emilie, for having me on your blog today and for being part of the Teen Book Scene’s Shattered Souls blog tour.

For more information about Mary Lindsey you can visit her at http://www.marylindsey.com and you can also pre-order Shattered Souls from Amazon or Barnes & Noble.

Be sure to check out the rest of the tour through The Teen Book Scene!