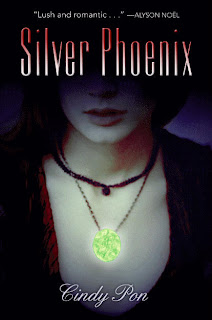 Ai Ling can see into other people’s minds and reach into their spirits. But she doesn’t know why this power has awakened inside her. She only knows that it is growing. It leads her on an epic journey--one that brings her to the edge of the deepest evil.

Chen Yong has a quest of his own, but then his path crosses Ai Ling’s. And there’s a connection so strong that neither can ignore it.

Now they must face terrifying demons determined to kill them, and battle through treacherous lands. It is their destiny. But can destiny keep them together?

Silver Phoenix was very much unlike everything else I tend to read. But as it turns out, that was a very good thing and I greatly enjoyed reading the book. As I’ve said previously, traditional fantasy doesn’t really tend to be my cup of tea, but every once in a while it’s always fun to branch out and read something different.

Ai Ling has always thought she was perfectly normal, that is until she starts being able to see into people’s minds and also connect with their spirits. When her father disappears during what is supposed to be a trip for work, Ai Ling decides that she needs to travel to the Palace in order to find him and bring him home. During her travels, Ai Ling meets Chen Yong, who is on a quest of his own trying to find out more about his past. Both feel a connection and together they join forces to defeat what is thrown at them during their journey. They will face demons who want nothing more but to kill them and lands more dangerous than the last. But will they be able to survive through it all?


Silver Phoenix is a journey in every sense of the word. The story revolves around Ai Ling’s journey from her village to the kingdom’s Palace in order to find and save her father. But that is only one of the journeys in the book. The story is also all about Ai Ling and Chen Yong’s journeys as individuals. During the course of the story, Ai Ling goes from being a girl scared of what’s out in the real world to a strong young woman who is not afraid to stand up and fight for what she believes in. Similarly, Chen Yong goes from being someone who doesn’t trust anyone to someone who opens himself up to others. These are the kinds of characters that I love reading about, characters that evolve and almost start to feel real.

The story was superbly written. I’m not particularly in to traditional fantasy but the way the book is written, I didn’t even realize that’s what I was reading. I was completely drawn in and was captivated the whole way through. The world in which the story takes place was incredibly well built. Even though I knew it was a fictional world, there were times when it felt completely real and I could easily picture the whole thing. Everything about this story was incredibly well written and everything felt completely real.

Silver Phoenix was an incredible story that was superbly written. It took me on a journey to a different time and place and I enjoyed every minute of it.