Today I have the pleasure of having Holly Schindler, author of A Blue so Dark and Playing Hurt, on the blog as part of the Canadian blog tour for Playing Hurt. She was kind enough to answer a few questions for me. Here is what she had to say. 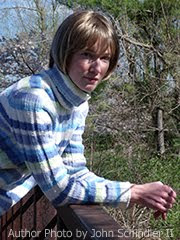 How was writing PLAYING HURT different from writing A BLUE SO DARK, your first novel?

Actually, I drafted PLAYING HURT before I ever drafted A BLUE SO DARK. And while BLUE wrote really very quickly, PLAYING HURT had a longer drafting process. PLAYING HURT also changed the most, from first draft to final published version—in fact, the first draft of PLAYING HURT didn’t feature the sports subplot or chapters written from Clint’s POV.

Where does inspiration come from when you write? Did it come from different places for A BLUE SO DARK and PLAYING HURT?

All my books come from a scenario, rather than from an idea for a character. With A BLUE SO DARK, I knew I wanted to write about the possible link between mental illness and creativity. With PLAYING HURT, I knew I wanted to write about learning the difference between loving someone (which is how Chelsea feels for Gabe) and being passionately IN love with someone (how Chelsea feels for Clint). From those basic scenarios, I start to create characters, outline a plot…

Both Chelsea and Clint were very involved in sports in high school. Were you particularly athletic in high school or more into music like Chelsea’s brother Brandon?

Very perceptive question! Yes, I was very much like Brandon, rather than Chelsea or Clint. I’ve never been particularly athletic at all—if you’d told me a few years ago that my second book would feature athletes, I would have laughed.

But I’ve always adored music. When I was in high school, I took guitar lessons from a local musician who played with the Ozark Mountain Daredevils (and was the most innately talented person I’ve ever known)…

Did you always want to be a writer or was there something specific that made you want to write?

I’ve always loved books and reading—and was writing stories by the time I was in the first grade. It’s always been a lifelong dream, just something I always had to do.

Are you working on anything new you’re allowed to share with us?

My debut middle grade novel will be released by Dial in the summer of 2012—the book doesn’t yet have an official title—or cover art! I can’t wait to finalize both…

You can visit Holly Schindler on her website at hollyschindler.com and on her blog at hollyschindler.blogspot.com, as well as follow her on Twitter @holly_schindler. You can also find her and other YA authors at YA Outside the Lines and she also recently started a blog with a group of middle grade authors which you can find at Smack Dab in the Middle.

Be sure to check out the final stop of the Playing Hurt Canadian blog tour on Readers Unite next week.