What I Learned From Being a Cheerleader by Adrianne Ambrose 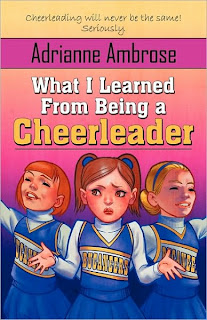 Eleven-year-old Elaine Rewitzer is funny, smart and happy being a geek, but when she wins a spot on the Cross Creek Middle School Buccaneers cheerleading squad, she gets totally into her new life. Her mega-brain best friend Bethany warns that Elaine will just become “part of the herd,” and her best geek-guy-pal, Tim, (who’s struggling with nose polyps) feels forgotten.

Will Elaine survive the roller coaster of the pre-teen cheerleader fame? Will she win the heart of the cutest boy on the basketball team? Will she confess her “uncool” love for comic books? Will she lose Bethany and Tim’s friendship for-evah?

Until I received an e-mail from Adrianne Ambrose asking me if I would review her book I had never really considered reviewing Middle Grade books. It’s not that I have anything against them, I guess I just forgot about them over the years. Now that I’ve read What I Learned From Being a Cheerleader I remember why I used to love these books. They are so much fun to read and everything always works out for everyone in the end.

Elaine wants to be a cheerleader but doesn’t want to tell her friends that she plans on trying out for the squad. They probably wouldn’t understand and would just make fun of her for wanting to try out. But then she actually becomes a cheerleader and all her hopes of becoming popular and finally talking to Todd Watson, the cutest boy on the basketball team, seem to be about to come true. But as it turns out, becoming a cheerleader doesn’t guarantee immediate popularity and she can’t admit to any of her new friends that she’s really into comic books because they would just think that she’s a total geek. When everything was supposed to be so good for Elaine things end up going from bad to worse.

I remember being eleven years old and being just like Elaine. I even had a diary and wrote just about everything in it. Even though I’m close to being ten years older than that now, I can still relate to Elaine. At least, the eleven-year-old in me totally did. Adrianne Ambrose really got what it feels like to be eleven years old and wanting to be popular. To me, Elaine was really realistic and I could easily have pictured my younger self in her place. Despite what people say about your high school years being tough middle school is just as hard. You’re only starting to be interested in certain things (boys) but still don’t want to let go of the things that made you happy when you were a little younger (like go trick-or-treating). A lot of middle school girls probably feel just like Elaine does in the book.

The story was really cute as well. It’s one of those books where you know everyone is going to live happily forever after but you still insist on reading it just because of how good it makes you feel. Reading the book, I just wanted to go back to middle school where everything was just so much easier even if at the time it seemed like I would never make it through alive. Half the time I could picture myself, as I was when in was eleven, in the story or just thinking “Oh I remember when this and that used to seem like the biggest problem I could have.” It was really fun to go back to that time through the story.

What I Learned From Being a Cheerleader was a great story. It reminded me of how much I used to love all those Middle Grade books and that I should really go back to reading them from time to time. I wish I could pass on this book to people of that age I know, but most of them are boys and I doubt many of them would want to read about a cheerleader, even if Elaine is a total comic book geek.