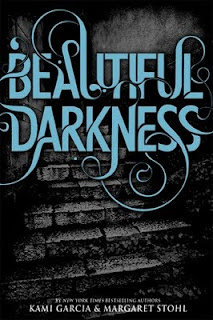 Ethan Wate used to think of Gatlin, the small Southern town he had always called home, as a place where nothing ever changed. Then he met mysterious newcomer Lena Duchannes, who revealed a secret world that had been hidden in plain sight all along. A Gatlin that harbored ancient secrets beneath its moss-covered oaks and cracked sidewalks. A Gatlin where a curse has marked Lena’s family of powerful Supernaturals for generations. A Gatlin where impossible, magical, life-altering events happen.

Together Ethan and Lena can face anything Gatlin throws at them, but after suffering a tragic loss, Lena starts to pull away, keeping secrets that test their relationship. And now that Ethan’s eyes have been opened to the darker side of Gatlin, there’s on going back. Haunted by strange visions only he can see, Ethan is pulled deeper into his town’s tangled history and finds himself caught up in the dangerous network of underground passageways endlessly crisscrossing the South, where nothing is as it seems.

Oh how I love this story. I don’t even know where to begin with explaining just why I loved this book so much. Kami Garcia and Margaret Stohl are just such wonderful writers and I saw that again in Beautiful Darkness. And then there’s also Ethan but I’ll get to that in good time. Before I even begin reading I knew I was going to love this book, just like I did Beautiful Creatures and I was most certainly not disappointed. This was book was simply amazing and I had the best time reading it.

Lena made it through her sixteenth birthday without having been claimed by either Light or Dark but that doesn’t mean she didn’t come out damaged. Macon is now dead and Lena is pulling away from Ethan, who doesn’t know what to do anymore. Not only that but Ethan finds himself being pulled further and further into the Caster world that for so long was hidden from him. He finds himself having visions no one else is having and no one can explain. Working with Marian and Liv in the library may get him some answers but not really the answers he is looking for. But more than anything Ethan just wants to get Lena back even if it means she won’t be the same.

Lena, you puzzle me so much sometimes. I love Lena but sometimes she just needs to pick a side and stick to it. In this book, she infuriated me more than anything else, but in a good way. I mean why would she keep on trying to get away from Ethan, a guy who pretty loves her to death and and refuses to give up on her no matter what? But at the same time I can understand why Lena is doing what she’s doing, it’s just her way to protect everyone she loves. New to the story was Liv and I absolutely loved her. She made me laugh so many times and she could be pretty unpredictable at times, which I think is one of the things that made me love them that much more. It was really fun to have another girl character come in and bring another perspective to the table. I also really liked seeing Ridley again and seeing her change. That is honestly all I can say about her without giving too much of the story away.

And now I start on Ethan, I promise I’ll keep it as short as possible. Oh Ethan how I love you. I would gladly trade places with Lena and have a guy who would never give up me and would love me no matter what. I’m sure that guy will actually come someday but for now I’ll just stick to dreaming about Ethan. He is just basically the ultimate good guy and you can’t help but like him. I also love the fact that the story is told from his point of view as opposed to having from Lena’s point of view for instance. So yeah, I love Ethan there really isn’t that much more to it than that. I absolutely loved that I got to see more of Link. He is just such a fun character he had me laughing out loud so many times. I just always lightened the situation, and so many times light was exactly what the situation needed.

And the story itself also did not disappoint. At first I was kind of scared that the story would be a lot like Beautiful Creatures but as it turned out it really wasn’t. It was a completely new story and I loved seeing it develop, and most of the time it was almost impossible to predict what would happen next which I absolutely loved. There was always some twist that I didn’t expect and it made me keep on reading and practically read the entire book in one sitting. There was only the end that slightly puzzled me, but I think I have it figured out for the most part.

Beautiful Darkness is an amazing read and everyone should read it. And if you haven’t read Beautiful Creatures, please go and get yourself a copy because they are just such great books. Trust me you won’t be disappointed, the story is magical in more than one way.