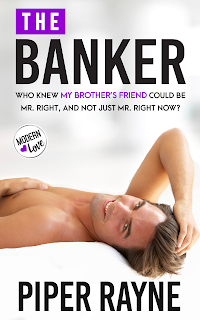 Who knew my brother’s friend could be Mr. Right, and not just Mr. Right Now?

My brother refused to introduce me, so I blame him. If he’d just caved, and introduced me to Jasper, I wouldn’t be in this mess. I mean, really what’s the big deal? I’m not interested in the guy’s looks.

Oh no, I want his cold hard cash. (Be honest, you were expecting that other four letter ‘c’ word weren’t you?)

Now, before you go getting all judgy, I’m not a gold digger. I have a legitimate business opportunity for Jasper to invest in. The problem is that my stick-up-his-ass brother is embarrassed that his twin sister invents kick ass sex toys. His problem, not mine.

So, I took matters into my own hands. Defeat isn’t a word in Lennon Hart’s dictionary.

Using my stealthy P.I. moves, I narrowed my search to a time and place where I knew I could find him. It was completely innocent. A chance meeting that would give me the opportunity to pitch my business.

It wasn’t until I sat down across from the gorgeous panty soaking man in front of me, that I realized I wanted so much more than just his money. I could very well want his heart if I wasn’t careful.

Apparently my P.I. skills aren’t as stellar as I thought because Jasper had his own secret—and it changed EVERYTHING.

I said this after reading The Boxer, the second book in Piper Rayne's Modern Love series, and I'll say it again now that I've read The Banker: these books just keep getting better and better. In fact, I would even go so far as to say that The Banker was my favourite out of the three books.

I LOVED Lennon. Even when the story wasn't about her (as in the previous two books in this series), I loved her. I don't know exactly why other than something just really clicked for me when it comes to Lennon. I always wanted to see more of her, and more than that, I wanted to see what it would take to get her to see that maybe letting herself fall for someone isn't the worse thing in the world. Enter Jasper. And really, Jasper was the perfect match to balance out Lennon (and duh, because otherwise what would the point of the story be). I loved seeing them together and I loved seeing the gradual change happen in both of them as they allowed themselves to let the other person in. They worked together and they worked for me. And there's a certain other character who's name I won't mention (because SPOILER) who totally charmed me and put a smile on my face anytime they were on the page. It just made a great story even better and I loved that character for it. And Lennon and Jasper, of course, since this whole thing is about them.

I also want to mention the friendship in the Modern Love series. Sure, these books are romances, but there's also friendship between Whitney, Tahlia and Lennon that's present throughout all three books. I loved how the friendship continued to be important to the three girls as their lives changed and they started up new (romantic) relationships outside of that friendship. No matter what was going on, they were always there for each other and I loved those moments where it was just the three of them being ridiculous together or supporting each other.

If you want some fun romances that are just a pleasure to read, then do yourself a favour and check out these books by Piper Rayne. If you're anything like me, you'll be surprised by how much you end up loving the stories and the characters. One thing's for sure, I will definitely be checking out more books from Piper Rayne in the future.