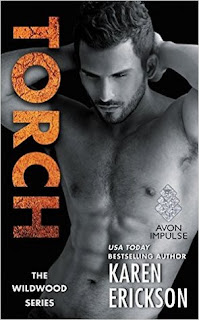 Wren Gallagher won’t give him the time of day and it’s making him crazy.

But he won’t give up without a fight…because there’s one thing he knows for sure:

Most women swoon over Tate’s devilish grin and firefighter uniform. But Wren couldn’t be less impressed by his good looks and flirtatious banter—in fact, she seems to downright despise him. She thinks he’s a player, but his attraction to her is no game. Wren is unlike anyone he’s ever known and he isn’t about to let the feisty, gorgeous woman slip through his fingers.

I've really enjoyed reading Karen Erickson's Wildwood series over the last few months and I was definitely excited to read about Wren and Tate in Torch. Both were characters I'd been dying to find out more about while reading the previous books and I was happy to finally get my fill of them. Though if I'm being completely honest, I wouldn't have minded all that much of Torch had been twice as long if only so I could have spent more time with Tate and Wren. I just loved the dynamic between the two of them - the way they seemed to know just how to push the other's buttons and took pleasure in doing so. But at the same time, I just knew that the reason they got under each other's skin so much was because they were clearly meant to be together. And though I liked them before, I loved them when they finally gave in to what was there. Tate was exactly what Wren needed with everything going on, and Wren was great at calling Tate out on his crap which just worked out perfectly for them. All in all, Torch was a great story, one that I really enjoyed reading. My only hope is that there are more Wildwood books to come because I NEED to know who is behind all of those fires. That, and I wouldn't mind getting to see more of all these couples I've gotten to know in the series so far. And maybe more about Holden, the youngest of the Gallagher sibling since I feel like I've only just gotten glimpses of him so far. Okay, so I guess I have more than one hope where this series is concerned, but that's just because the stories are so great. 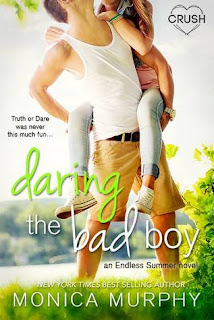 Truth or Dare was never this much fun…

Annie McFarland is sick of being a shy nobody. A session at summer camp seems like the perfect opportunity to reinvent herself—gain some confidence, kiss a boy, be whoever she wants to be. A few days in, she’s already set her sights on über-hottie Kyle. Too bad her fear of water keeps her away from the lake, where Kyle is always hanging out.

Jacob Fazio is at Camp Pine Ridge after one too many screw-ups. Junior counseling seems like punishment enough, but the rigid no-fraternizing-with-campers rules harsh his chill. When a night of Truth or Dare gets him roped into teaching Annie how to swim, she begs him to also teach her how to snag Kyle.

Late-night swim-sessions turn into late-night kissing sessions…but there’s more on the line than just their hearts. If they get caught, Jake’s headed straight to juvie, but Annie’s more than ready to dare him to reveal the truth.

Until Daring the Bad Boy all the Monica Murphy books I had read were either new adult or straight up contemporary romance. But her latest is YA and has me wishing that she would write all the contemporary YA books. Because Daring the Bad Boy? It was absolutely awesome. For real, I can’t remember the last time I smiled so much while reading a book. Because that’s totally what happened here. Sure, Daring the Bad Boy dealt with some more serious topics, but at its core it was a sweet summer-time romance set at a summer camp. And what’s not to love about that? Besides the setting and premise (which I am a total sucker for), Daring the Bad Boy also featured characters that charmed me right from the beginning of the story. Annie had this endearing quality about her and I couldn’t help but admire her for wanting to be brave and conquer her fears no matter how much those fears terrified her. Any time she did something brave, I wanted to cheer for her, much like Jake did. And Jake wasn’t the bad boy everyone, including himself, made him out to be. I loved seeing him gradually come to realize that he didn’t have to act the way he was acting and he could just be himself (well, after some not-so-easy conversations with some of the people in his life). Through it all, seeing Annie and Jake come together over the course of the story is what made me love Daring the Bad Boy as much as I did. Because sometimes, all you really want is for the summer romance to work out in the end. She created the game, but the rules are about to change.

Taurus: Hold fast to your single-minded nature today--no matter how long her legs or how lush her red lips.

Gemini: You were a shining star last night, but reality can be a real--well, you get the picture. Just remember: Tall, dark, and British equals no corner office for you.

Will Evans never wanted a reason to stay.

Holly Chandler wants nothing more than for him to go.

But neither one is prepared for what can happen in six months. Because it doesn't matter what you want when what you need walks out the door.

Holly's been busting her butt to make partner at Trousseau and there's no way she's going to let some stuck-up British arsehole get in her way--no matter how drop-dead gorgeous he is. But that doesn't mean she can't have a little fun in the process. She has a six-month rule: date just long enough for the honeymoon phase to wear off, then walk away before anyone gets hurt. If they both know the rules up front, walking away will be a piece of cake. Or maybe not...

After falling completely in love with the first book in A.J. Pine’s Kingston Ale House series earlier this year, I couldn’t wait to read more about the group of friends that hung around the bar. I absolutely got my wish with The Six Month Rule.

I read A.J. Pine’s The One That Got Away earlier this year and absolutely loved it. So I was excited to find out that it was the first in a series of contemporary romance standalones. What made me even more excited? Finding out that the second book, Six Month Rule would be about Holly. Because those she might only have had a minor role in the first book, I knew right away that I wanted Holly’s story. And Holly’s story? It ended up being pretty freaking fantastic. I loved reading this office romance about two people who don’t really think they have time or are able to be in any sort of long term relationship. In fact, there were plenty of times when it was almost fun to see them try to deny that what was going on between them wasn’t going anywhere and that it was just temporary. Because as someone reading their story and seeing it all happen, I totally knew there was nothing temporary about what was happening between them. The chemistry between Holly and Will just leapt off the page, and there wasn’t a single moment when I wasn’t rooting for them.

Have I mentioned that I loved Holly and Will? Because I really, really did. I was kind of sad when I got to the end of the book because it meant I wouldn’t be reading about them anymore and all I wanted was to keep reading about them forever. I loved how independent Holly was and how determined she was to get to the top on her own merit. Sure, there were times when I wanted to tell her that it was okay to try to have a life outside of work and to let someone else take care of her (especially if that someone was Will), but Holly was who she was and she knew it. And Will, he thought he knew who he was and what he wanted. But then Holly came into the picture and threw a wrench in his carefully laid plans. And maybe that makes me a bit of a sadist, but I loved watching Will struggle with how he felt about Holly because it was always so fun to watch. But my favourite Will moments were the ones when he was interacting with his daughter. I am a sucker for romances that feature young children because they always have a way of stealing the show and melting my heart when they interact with their parent. Adorable, heart-melting moments were exactly what I got with Will and his daughter and it only made me love him more. And just in case I hadn’t made that abundantly clear by now, I pretty much adored Holly and Will together.

In case it wasn’t obvious, I absolutely loved A.J. Pine’s The Six Month Rule. I loved the story, I loved the characters, I loved the romance, and I just loved getting to hang out with the Kingston Ale House gang. And I can’t wait to hang out more with them in future books.