Today I have the great honor of advocating for Lucas Delos from Josephine Angelini's Starcrossed trilogy over at YA Sisterhood as part of the YA Crush Tourney. You can read my defence below and if you could take a minute to head over to YA Sisterhood to vote for Lucas, that would be great!

First off, and that should be plenty of reason, the Fates strongly suggest you vote for Lucas. Would you really want to invoke the wrath of the Fates on yourself? I didn't really think so.

But if that's not enough for you, just keep reading to find out more about Lucas.

Lucas is a demigod, so like you would expect he is quite the handsome young man. He is tall, easily over six feet and has a powerful build (again, he's a demigod). But despite that powerful build, he is not bulky, instead his muscles are described as long and lean. To top all of that off, he has short black hair, a deep tan and "swimming pool blue eyes". There's no question about it, Lucas is hot, plain and simple. Want some personal opinions on his looks? Here they come.

Claire - "Lucas, however, is an über-babe. Quite possibly the most beautiful boy I've ever seen." (Starcrossed, p. 27)

Helen - "It wasn't his height or his coloring or his muscles that made him so beautiful, she conclude. It was the way he moved. She had only seen him twice, but she could tell he thought less frequently about his looks than everyone around him did. His eyes, as pretty as they were, looked out, rather than back at himself." (Starcrossed, p. 53)

Still not convinced? Here's one more from Helen.

"The last cobwebs clearing from her eyes, she decided that if Lucas was gay then she was going to get a sex change operation. He would be so worth it." (Starcrossed, p. 185)

But, you tell me, looks aren't everything. Well if those looks aren't enough for you, then you should know that Lucas has an awesome personality to go with them.

Lucas could quite possibly be the sweetest person in the world. Claire even says so--"He's not going around telling everyone you're monkey-butt crazy, so at least you brutalized a super sweet guy." (Starcrossed, p. 57)

But it's a lot more than Lucas just being the sweetest person to have ever lived. He would also do just about anything for those he loves. He will put everyone's well-being ahead of his own, no matter what that means. Where Helen is concerned, the only thing he wouldn't do for her is destroy thousands of lives--but he will do anything but that. The way he is with Helen is simply amazing, and even when he is told he shouldn't care for her as much as he does, it doesn't stop him. Even when he and Helen were still under the influences of the Furies, he was willing to jump in to her defence when they were supposed to be hating each other.

But he's not just an incredibly thoughtful and caring person. Lucas also has a pretty great sense of humor. One of the best examples is one of my favorite moments in the book. Wondering what I'm talking about? Just read below.

"'Piece of cake,' she said blithely, trying to distract him. 'So what are you doing next Friday night?'

'What have you got in mind?' 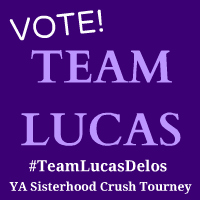 'We could try hitting each other with cars,' she suggested cheerfully.


'Did that last weekend with Jase,' he said with mock regret.

'Go to the zoo and throw ourselves to the lions?' she fired back quickly, desperate to keep him focused on her rather than his caved-in chest.

'The Romans sort of wore that one out. Got anything original?'

'I'll think of something,' she warned him."

Even in the most difficult situations, Lucas is there with his sense of humor at the ready.

Need more? Do you like a little superpowers in your boys? Well, Lucas has plenty of those in store.

Lucas is a Scion (demigod) so he has plenty of talents. For starters he has supernatural strength and is a natural fighter. And then he can fly. Yes, fly. He can just take off and go anywhere he wants to go anytime he wants. Along with flying, he can play around with how gravity affects his body--he can go from being light as a feather to being as heavy as a large boulder. But that's still not all. Because he's part of the House of Apollo, he can bend the light around him as he pleases, which makes for some pretty neat special effects on demand. Apollo is not only the god of light but also the god of music. So you guessed it, Lucas is also a pretty amazing singer. Just picture him singing to you. Are your insides melting yet? Lucas still has one more talent that's pretty rare. He's a Falsefinder. What does that mean, you ask? Well, Lucas can tell whenever someone around him isn't telling the truth. Could come in pretty handy if you ask me.

I've already talked about it, but Lucas' best quality is how sweet, caring and thoughtful he is. You'll be hard pressed to find another boy like him in those departments. What's even better is that he is all those things without becoming controlling, and that is more than enough to make my heart melt. What girl wouldn't want an amazingly sweet guy who will put her ahead of everything else but will still let her do what she wants? I thought, so.

If you're still not sure, here's a little recap. If you like your boys tall dark and handsome with piercing blue eyes than Lucas is the boy for you. Want more than just good looks? Lucas is the the sweetest and most caring person with a great sense of humor thrown into the mix. Don't want just a regular guy? Lucas is a Scion, a demigod or whatever you want to call it so he has plenty superpowers to show off.

Lucas is clearly the way to go, but I can't control what you do. Just know that you won't regret voting for Lucas Delos.

So if that convinced you, be sure to head over to YA Sisterhood to vote for Lucas, he needs our help! And be sure to tweet about the match using the hashtags #TeamLucasDelos and #YACrushTourney to show your support and help get Lucas more votes.