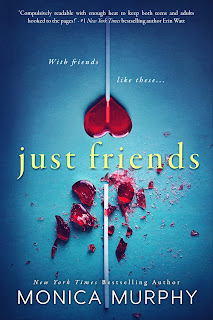 It’s the end of summer. Just before I start senior year with my two best friends in the whole world. Dustin and Emily are everything to me. We’ve been inseparable since middle school, and when we’re together, nothing can go wrong.

But things aren’t always what they seem. Em’s turned into a drunken mess who parties too much. Dustin and I have hooked up a few times—and now he’s ready to take our relationship to the next level. Yet I’m not sure I want things to change. I’m scared if I take it any further with Dustin, our friendship will be ruined forever. Then there’s Ryan. The new guy. He’s hot. He flirts way too much. And Em has totally set her sights on him.

So when my best friend betrays me in the worst possible way, guess who’s there to help me pick up the pieces of my broken heart? Ryan. But he’s so confusing. Annoying. Sweet. Sexy. I want to trust him, yet he makes it so hard. What I really want is for everything to go back to the way it was before.

Before I found out that best friends make the worst kind of enemies.

Though I've only been reading her books for a year (and I still have a lot of catching up to do), Monica Murphy has quickly become one of my go-to authors. Every time I hear she has a new book coming out, it automatically gets added to my TBR. Though her latest, Just Friends, left me wanting in some ways it was still a story I enjoyed reading.

When I first heard about Just Friends over the summer, I was seriously intrigued. I'm all about friendship stories, especially ones where the friendships don't seem to be all that healthy. So if the description was anything to go by, that's exactly what Just Friends was going to be. And it most definitely was. I can't quite remember the last time I read about a friendship as dysfunctional as the one between Liv, Em and Dustin. In fact, I would actually go so far as to say that Liv and Em's friendship was downright toxic. What I couldn't quite figure out was the why. For so much of the book I wished I could be reading part of the story from Em's perspective as opposed to just Liv's because I wanted to know why she was acting the way she was and doing the things she did. I wanted to believe there was more going on with her than her just being a "mean girl" for the sake of it. So much of Just Friends revolved around what was going on between Em and Liv and I just wish I could have gotten deeper into what that was...fingers crossed that gets explored in the sequel. Em and Liv's friendship aside, I loved seeing all the different relationship dynamics at play in the book, even if sometimes some of those relationships (or the motivations behind them) had me scratching my head a little. I'll be curious to see how everything plays out in the sequel because when Just Friends ended everything was pretty much all up in the air and I was left with a lot more questions than I got answers.

Though it didn't quite meet all my expectations, I still really enjoyed reading Monica Murphy's Just Friends and I look forward to reading the sequel. Mostly I just want answers to all the questions