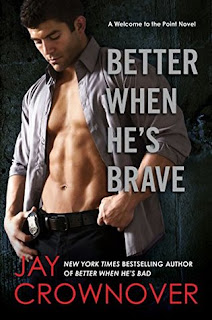 In New York Times and USA Today bestselling author Jay Crownover’s third novel in her sexy, thrilling Welcome to the Point series, a woman’s search for repentance leads her to the one man from her past she can’t forget as they join forces to save their city—and the explosive love neither can live without.

Titus King has always seen his world in black and white. There is a firm right and wrong in his mind, which is why as a teenager he left behind the only family he’d ever known to make a better life for himself. Now a police detective in one of the worst cities in the country, he can’t deny his life has turned a million different shades of gray.

They new criminal element in The Point has brought vengeance and destruction right to Titus’s front door, and walking the straight and narrow seems far less important now. The difference between right and wrong is nothing compared to keeping those he loves alive. To add to his already strained moral compass, the beautiful and mysterious Reeve Black has made her way back to town. This girl might be as dangerous to Titus as the guy trying to destroy The Point but he can’t walk away because he needs her—in more ways than one.

Reeve knows all about the threat tying to destroy The Point. She knows how ruthless, how vicious, and how cruel this new danger can be…and instead of running away, she wants to help. Reeve knows that she has a lot to depend for and saving the city, plus the hot cop that she hasn’t been able to forget might just be the only way she can finally find some inner peace.

With an entire city poised on the brink of war, Titus and Reeve stand in the crossfire—and it will take two brave souls to fight for the ultimate love.

Over the past year, I have fallen completely in love with the dark and gritty world of The Point. It’s a weird thing to say considering all the bad crap that happens there, but it’s a fact. Jay Crownover made me fall in love with this world she created and Better When He’s Brave only solidified this.

Titus King has made it his life’s mission to try to bring some light to the darkness that is The Point. Wanting nothing more than to make a better life for himself, Titus left his family behind and became a cop. But singlehandedly saving one of the worst cities world can take its toll. When someone new seems intent on destroying The Point and is going after everyone and everything he cares about, Titus will do everything he can to save his city. Reeve left The Point, hoping to put it all behind her. But she’s done running away and she’s ready to help Titus bring some light to The Point. But saving the city makes putting themselves in the crossfire and may require them to sacrifice what they’ve found in the midst of all this darkness: love.

I first found Jay Crownover’s Welcome to the Point series not exactly by accident but it wasn’t a series I was initially going out of my way to read. But the moment I read the first book, I became hooked. As dark and gritty and hard to read as some parts of this series are, I could read these books all day. It should go without saying that I was very much excited about Better When He’s Brave. I was lucky enough to be given access to an advance copy of the book and I wasn’t very successful in holding off on reading it. And the moment I started reading, I couldn’t stop. The thing about the books in the Welcome to the Point series is that they come with addictng stories, stories that leave you constantly wanting more, constantly trying to figure out what is happening and who is behind all the horrible things that are happening. Better When He’s Brave kept me on the edge of my seat the whole time I was reading. Much like Titus, I just wanted to know who was behind everything, why they were so set on burning the Point down to the ground. And there were some moments where I was seriously concerned for the safety of the people in this story. And I don’t really think I need to say that the romance was hot, but I will say it anyway. I was ALL for Titus and Reeve.

The whole time I was reading Better When He’s Bad and Better When He’s Bold, I was curious about Titus. There was just so much about him that I wanted to know. With Better When He’s Brave, I finally got all the answers I wanted about Titus, and then some. There was so much more to him than I could have thought, so much that I possibly couldn’t have predicted but at the same time helped explain so much of who Titus was and why he did what he did. And I’m not going to lie, everything I found out about him totally made me fall a little bit (okay, a lot) in love with Titus. So really, it’s no surprise that Reeve fell for her pretty hard. But Reeve herself, I wasn’t entirely sure about. Because of what she’d done in previous books, I wasn’t sure whether or not I could trust, if she was actually helping Titus or just trying to save herself. But the more I read, the more I grew to like Reeve and, much like with Titus, I began to understand why she was doing what she was doing. And like I’ve already said, I was all about Reeve and Titus being together. And them together was often HOT.

I loved and devoured Jay Crownover’s Better When He’s Brave. This story kept me on the edge of my seat and convinced me that I would be happy to keep reading stories set in The Point forever.

“Everyone has a breaking point.”

I sounded gruff and really had to concentrate on getting the words out because she leaned forward and her lips hit right below my ear on my rough jaw. Her teeth started to nibble and her tongue lapped a long wet trail all the way up behind my ear where she breathed, “I would love to see you when you reach yours.”

She curled her hand around the back of my neck and rubbed her cheek against mine. When I let my monster have at her, it took in giant mouthfuls, gobbled her up, and tried to burn as fast and as hot as the pleasure would allow.She wasn’t kidding when she said hers needed to be soothed. Every move she made was deliberate, erotic. We touched everywhere and somehow it was more intimate than all the times I had been inside of her over the last month. She brushed her chest against my own and I decided the playing field needed to level out a little, so I hooked my hands under her shirt and lifted it up off over her head. Her hair fell back around us like a dark curtain and I grabbed her face so I could kiss her. She blinked at me with big eyes and smiled.

“You are the only one that sees it, over and over again. You were the breaking point from the moment you walked in the door to tell me you helped Novak grab Dovie. I wanted to be disgusted, to hate you, but I didn’t. I thought you were beautiful and resilient. You seemed so misguided and lost, an even then I wanted to get you naked and fuck you on my desk.”

Her face lowered to mine and our lips touched just a tiny bit. One of her hands skated down the center of my chest and landed on my best buckle. I reciprocated by popping the clasp on the back of her bra and pulling it out of my way.

“You should’ve tried. I would’ve let you.” The words danced across my lips and somewhere in the center of my chest an animal howled in delight. That was what was missing in my life. Someone that appreciated all the sacrifice, the hard choices I had made to become the man I was, but who could also appreciate the fucked-up kid I had been.