Today I am taking part in the cover reveal for Falling For Alice, a new anthology all about Alice in Wonderland. For more information about the book, its cover and its contributors, and a giveaway, just keep reading!

2015 marks the 150th anniversary of Lewis Carroll’s beloved adventure, Alice in Wonderland—and as you might imagine, a lot of literary peeps are celebrating the occasion.

This story has a special place in millions of young (and old) hearts, including those of the five Young Adult authors in the FALLING FOR ALICE anthology. Today, as we launch the awesome cover for FALLING FOR ALICE, we also celebrate our publisher’s actual birthday (Happy Birthday, Jessica Bell at Vine Leaves Press), and all of YOUR unbirthdays. We hope you get to have your cake and eat it too. 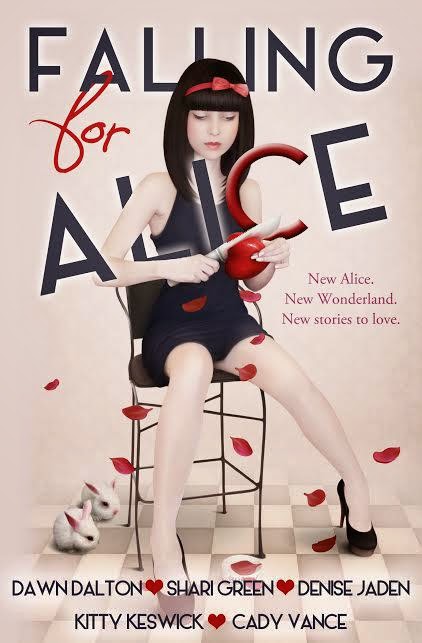 From the modern Alice dumped int eh Aquarian Age of the late sixties, to the present day Alice, tormented by body image and emotional issues, to the Alice of the future, launched forward through time and space, FALLING FOR ALICE offers five fresh takes on Lewis Carroll’s classic tale. For 150 years, people all over the world have fallen under Alice in Wonderland’s spell. Now, follow five Young Adult authors down the rabbit hole to discover Alice like you’ve never seen her before. One thing is certain—this is not your mother’s Alice.

Keeping up with the birthday theme, the authors were all kind enough to answer a birthday-themed question. Here's what they had to say!

IF YOU COULD ONLY HAVE ONE THEME FOR YOU BIRTHDAY FOR THE REST OF YOUR LIFE, WHAT WOULD IT BE?

Dawn Dalton
My birthday isn’t anywhere near Halloween, but I wish it was because I’d have a haunted theme every year. Hubs and I go crazy at Halloween, often winning neighbourhood awards for most creepy décor—my husband even built a coffin where he hides to “scare” the older kids. Plus, we put on an annual feat for out friends that includes spooktacular appetizers like the devilled spider eggs, mummy hot dogs, cheesy bone biscuits, shrimp brains, and so much more. Our guest list increases every year—last Halloween, we had 55 people at our house.

Denise Jaden
I’d probably choose superheroes. There is so much variety within that theme, and my whole family are superhero fans. We’re already stocked on T-shirts and cups, and other fun party supplies. One year it could be Wonder Woman, the next, The Avengers…Plus, it would be a lot of fun to see our friends dressing up as they favorite superheroes.

Kitty Kreswick
Something beach themed—I love the ocean/beach. We’d have the party on the beach and stay well after sunset and have a bonfire. Some great food, sticky fingers BBQ—with a great potato salad and lots of choices of drinks. Maybe even some chocolate, graham crackers, and marshmallow for s’mores.

Cady Vance
It would definitely be Harry Potter because it’s my favorite thing in the entire world, and I would never get tired of dressing up in my Gryffindor garb!