In the Shadow of Blackbirds by Cat Winters 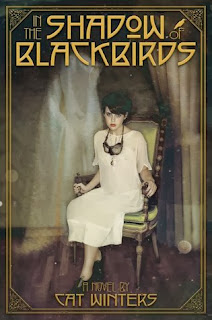 In 1918, the world seems on the verge of apocalypse. Americans roam the streets in gauze make to ward off the deadly Spanish influenza, and the government ships young men to the front lines of a brutal war, creating an atmosphere of fear and confusion. Sixteen-year-old Mary Shelley Black watches as desperate mourners flock to séances and sprit photographers for comfort, but she herself has never believed in ghosts. During her bleakest moment, however, she's forced to rethink her entire way of looking at life and death, for her first love--a boy who died in battle--returns in spirit form. But what does he want from her?

Featuring haunting archival early-twentieth-century photographs, this is a tense, romantic story set in a past that is eerily like our own time.

I'll be honest, if it hadn't been a book club pick, I probably wouldn't have picked up Cat Winters' In the Shadow of Blackbirds on my own. Though that's not to say that I didn't enjoy the book, because I really did, in really unexpected ways.

Being a sixteen-year-old girl in the fall of 1918 isn't easy. Especially for Mary Shelley Black, whose father has been sent to jail for being against the war and whose best friend has enlisted to go fight overseas, all while the Spanish influenza ravages cities across the country. Now in San Diego and surrounded by mourners running to spirit photographers to help with their grief, pragmatic and logical Mary Shelley can't help but shake her head at the idea of ghosts. That is, until she learns the terrible news about Stephen. Now, the only way for Mary Shelley to find peace is to start believing in the one thing she has always been opposed to.

In the Shadow of Blackbirds isn't a book I would have picked up on my own if I hadn't had to read it for book club. But that would have meant I would have missed out on a great book. This story wasn't what I thought it was going to be. Admittedly I didn't know much about it before I started reading so that's not really saying much. What I liked about this story was that instead of being hyper focused on World War One, as you would expect a book set in 1918 to be, it instead focused on the Spanish influenza, the other big event that year. And as weird as it might be to say this, I really enjoyed that aspect of the story. As much as I know about WWI, I don't really know much about the Spanish flu other than the fact that it killed more people than four years of war did. So in that sense, I learned a lot from In the Shadow of Blackbirds. But what really made this story unexpected was that for 95% of the story the main love interest was a ghost. That definitely made things interesting. But the setting, and everything it entailed, made it feel almost as if the story wasn't a ghost story.

I really enjoyed reading this story from Mary Shelley's point of view. She was definitely ahead of her times and it made her really interesting to read about. For a sixteen-year-old girl in 1918, being interested in logic and science isn't exactly what's expected but she never let that bring her down. What I liked about Mary Shelley most, though, is that it took a while for her to accept the fact that spirits were real and that Stephen was more or less haunting her. And I really didn't expect Stephen to be the way he was. It's not every day you're going to read a story where the main love interest is dead for 95% of it. But at the same time, Stephen was an interesting character to read about, especially when it came to how much he had been affected by the war in such a short period of time. In 1918, people didn't know everything we now do about PTSD so they didn't really know what to do with the boys coming back from the war who were completely traumatized by what they had seen. It definitely added a certain level of depth to who Stephen was and, at times, it seemed like he was two completely different people: the Stephen Mary Shelley remembers from before he went to France, and the Stephen who came home from the war. All of this to say that it made for a really interesting story to read.

Even if Cat Winters' In the Shadow of Blackbirds isn't what you would normally choose to read, I suggest you at least give it a try. I know I wouldn't have normally picked it up on my own, but by the end I found myself to be pleasantly surprised by the story.