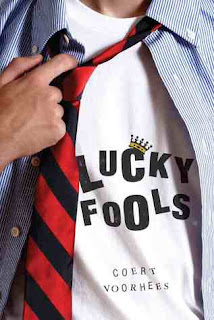 What does it cost to fight for your dream?

David Ellison has always been told that he can do anything he sets his mind to, but when he sets his sights on Juilliard rather than nearby Stanford University, his parents quickly point out that "anything" doesn't include throwing away his private school education to study acting.

But David is determined to make his dream a reality. As his Juilliard audition approaches, he jumps wholeheartedly into his latest play…and right into the path of his beautiful costar, Vanessa. Caught between his devotion to long-time girlfriend Ellen and his undeniable attraction to Vanessa, David finds himself ensnared in a love triangle of his own making, with his relationship teetering on the brink of disaster.

To make matters worse, Oak Fields Prep is thrown into chaos by a mysterious prankster known as The Artist, who is determined to sabotage the college aspirations of the school's highest achievers. Anyone who excels is a potential target--and David, the star of every play, could be next.

From the author of the critically acclaimed The Brothers Torres comes an insightful novel about enduring the pressures of high school, surviving the ins and its of love, and fighting for your dreams, no matter what.

I'll be honest and say that what originally caught my attention was the cover of Lucky Fools. Then I read the synopsis and I knew it would be a book I would enjoy. While the book ended up being a little different than I expected, I was still able to really enjoy the story.

David Ellison has always wanted to be a professional actor and has his sights set on Juilliard. And everything seems like it will be working out for David. But with his Juilliard audition only a couple of weeks away, David becomes a little less focused and the senior class of his elite prep school has become the target of The Artist, a mysterious prankster. And by the look of it, David could be the next victim. And if that happens, everything might not go exactly as planned and David's entire future could be in jeopardy.

For whatever reason, I expected Lucky Fools by Coert Voorhees to be a really funny book. Don't ask me why, because I really don't know. While Lucky Fools wasn't as funny as I expected it would be, it didn't stop me from really enjoying the book. The story ended up working on two levels. On the surface, it was the story of a high school senior trying to navigate the college application process. But when you looked a little deeper you realized that this same high school senior was just trying to find his place in the world. And of course this was all done with some humour, which is what made me enjoy the story that much more. Though the best part of the story was that it was told from a boy's perspective.

The story in Lucky Fools was told from David's perspective and that made me love the story. And David himself had a lot to do with it. I loved how he managed to take himself seriously while at the same time not taking himself seriously at all. It made for interesting situations. But mostly I was happy when he finally realized what really made him happy and he went for it, and everything eventually worked out for him. The one character that really bugged me was Ellen. To me, she never really seemed sincere ad there was always something a little off about her. And I'm not going to lie, I was happy to see I wasn't wrong about her because she kind of annoyed me. But aside from Ellen, I really enjoyed the other characters, especially the humour Colter brought. It totally made up for Ellen.

Overall, Lucky Fools by Coert Voorhees was a highly enjoyable read. If you are looking for a YA that is both fun and serious, and is told from a boy's perspective then I recommend you give Lucky Fools a chance.