The Vyne by Daniel Walls 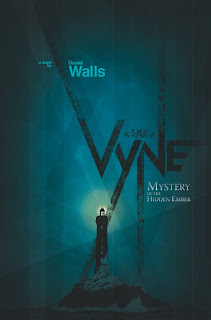 Asher Meadows has a secret--one he’s so terrified of, he calls it his curse. For as long as he can remember he has possessed unexplainable, supernatural abilities. And for sixteen years he has kept them hidden. But when an elusive girl named Scar enters his village, Asher’s life is forever transformed.

Bound by mutual despair, the teens plot to run away together. However, when a sacred medallion finds its way into Asher’s hands, they soon learn that running is not an option, it’s imperative. In the wake of discovering the medallion, Asher is thrust into the pursuit of a legendary treasure, believed to possess an incredible power--the antidote for saving the world from foretold doom. Yet, for reasons Asher can’t understand, the key to unlocking this power lies with the very mystery of his curse.

Hunted by seething pirates bent on intercepting the medallion, Asher begins to realize that Scar has secrets of her own; she is not the girl he thought she was. Time is running out as he struggles to find the strength to let go of his feelings for her and summon the courage to embrace his destiny--a destiny that could save the world, but cost him everything...

Fantasy doesn’t tend to be my cup of tea but the premise for The Vyne sounded really interesting, plus it was mixed with steampunk which I really like. After having read this book I won’t go so far as to say that fantasy has now become my cup of tea but I may now be a little more open to the genre.

Ash has never really had an easy life. He has spent most of his time on his father’s boat trying not to get in his father’s way for fear of what he might do to him. The thing about ash is that a “curse” has plagued him for the entirety of his life. And as of late this curse seems to be intensifying with Ash discovering he has powers he never even know about. While all of this is taking place, things are changing in Ash’s fishing town and no one seems to really know why. They only common thread is Scar, the mysterious girl that Ash found when he was out on the boat one day. Now everything in Ash’s life is changing and as he soon finds out, there may be more to his past than he ever knew.

Before I say anything on the characters, let me just say that here is a whole slew of them. Honestly, if you name it, it’s there in the book as far as I know. Often, what really makes a story for me is the characters so I struggled a little with this book at first. All I wanted was to know more about Ash and Scar and it took a while for me to get what I wanted. Both characters had a lot to them, more than I thought there would ever be. As for the slew of other characters, there were some good ones, some bad ones, ones that annoyed me and some that made me want to through the book against the wall amongst others. Despite the fact that I’m not usually one for character heavy books, it was an interesting change of pace for someone like me.

Essentially, this book is very much driven by the plot. At first, I had a lot of trouble piecing everything together, all the story lines I was reading just didn’t seem to fit together. That is, until everything sort of came together. At which point things started to pick up and I started enjoying the book more. From that point on, it was one adventure after the other for Scar and Ash. And at the same time, the two characters started really developing and then I was able to really truly enjoy the book. Trust me, if you like action and plot twists you will have more than you possibly could have ever wished for.

Overall, The Vyne was a great read, it wasn’t light or fast but enjoyable all the same. If you’re up for trying something new like I was, you should pick this one up, you won’t be disappointed.