It's YA Love Triangle Week over at Down The Rabbit Hole and I'm guest posting and representing Team Damon. I absolutely LOVE the Vampire Diaries and the Salvatore brothers. So here goes: 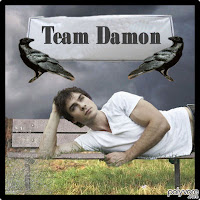 Okay, so here’s the deal: Team Damon is the team to be on. I had my doubts about it too at first, I’ll admit it. But I came to my senses soon enough and now don’t even think about trying to get me to change back over to Team Stefan. It’s just not going to happen, so deal with it.

There is just so much more to Damon than there is to Stefan. Other than the fact that he loves Elena, is more or less a good guy a

ll around and his good looks, what else is there really to Stefan? That’s what I thought, not that much. Damon on the other hand has a lot more to offer: he’s mysterious, dangerous, has his moments with humor and of course he’s pretty damn hot as well. And that’s only on the surface.

When he finally gets the guts to open up and show more of himself, Damon can be an absolutely great guy. Sometimes you can just tell that he wants to be better he just hasn’t figured quite how to do it yet. But when he finally does, he will be just as if not more lovable than Stefan, believe me when I say this. He has his moments when he can be so amazing, both in the original series and the new one. In the new series, particularly the latest book, you can see more and more of his good side start to appear and that just makes me love him that much more.

And let’s not forget about the TV show. How can you not love Ian Somerhalder playing Damon. I mean just the eyes is enough to get most girls to fall right in love with him. And more and more on the TV show, you start to see his good side come through. Stefan’s not the only one who loves and wants to save Elena at all costs. Damon wants just the same thing, he just has a different way of showing it.

Basically it all comes down to this, Damon can be just as soft, sensitive and sweet as Stefan but he can also be a total badass which just makes him that much more awesome. Maybe I’m biased and the fact that I have a major tendency to fall for bad boys probably doesn’t help either, but Team Damon is the way to go. You can believe whatever you want but Damon will always be better than Stefan for me.

In case it isn’t clear yet. If you aren’t on TEAM DAMON, you are most definitely on the wrong team.

So go on over to Down The Rabbit Hole and vote for Team Damon!