The Iron Daughter by Julie Kagawa 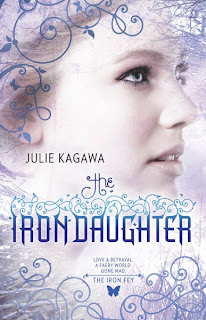 Half Summer faery princess, half human, Meghan has never fit in anywhere. Deserted by the Winter Prince she thought loved her, she is prisoner to the Winter faery queen. As war looms between Summer and Winter, Meghan knows that the real danger comes from the Iron fey--ironbound faeries that only she and her absent prince have seen. But no one believes her.

Worse, Meghan’s own fey powers have been cut off. She’s stuck in Faery with only her wits for help. Trusting anyone would be foolish. Trusting a seeming traitor could be deadly. But even as she grows a backbone of iron, Meghan can’t help but hear the whispers of longing in her all-too-human heart.

I had loved The Iron King when I read it over the summer and I can honestly say that I loved The Iron Daughter even more. The story, the characters, everything is better. I had an amazing time reading it and getting reacquainted with Meghan, Puck, Ash and Grim along with meeting all sorts of new characters. I also have to say that I am now officially Team Ash and good luck getting me to change my opinion.

Meghan is being held at the palace of the Winter Court, wondering when if she’ll ever get to see Ash again. Or if her father will ever consider coming to her rescue. Or how much time has passed out in the real world. Is her family even still alive? When Meghan finally sees Ash, the reunion is quite far from what she expected it to be. And on top of everything else, war is threatening to break out between the Summer and Winter Courts, which would only allow the Iron Fey to come in and take over the Nevernever. Despite her efforts to prevent a war between the two courts, Meghan has to run away and to find and return the Scepter of the Seasons, the item that is causing all this trouble. But what about Ash, was he really playing her when he told her all those things.

I love Meghan Chase. She is a pretty awesome heroine, and one that doesn’t let others walk all over her...except sometimes where Ash is concerned. He just has this way of getting to her. But other than that I just love Meghan. She just has this great personality and I just can’t help but like her. I really don’t think I could ever not like her. My favorite side of Meghan is really how she is when the action really starts. The ends to which she’ll go to help those she loves are just incredible sometimes. And I wouldn’t be honest if I didn’t admit that whenever she was with Ash I kinda sorta wanted to trade places with her.

Why there is even a Team Ash - Team Puck debate is a mystery to me. I love Puck a lot but he’s just no Ash. Puck is great, I love his humor and how he is with Meghan. I wouldn’t mind having Puck to myself. He just has me laughing pretty much every time he opens his mouth to speak and I really look forward to seeing him and finding out what stupid thing he’s going to do or say next. I felt bad for him at the end even if I was really happy with the way things turned out. And now I will say it: I am absolutely in love with Ash. Half the time his behavior completely gets on my nerves but the rest of the time I am more or less in awe of him. I totally understand why Meghan feels the way she does about him. I mean, how could she not? There is so much more I could say about Ash but it would be way too spoilery and I don’t want to ruin it for those who haven’t read the book.

I liked the the story from The Iron Daughter better than I did the story in The Iron King. Both are really great and I loved both of them but there was something this time around. It might be that the action started pretty much right away. The Faery world was already all established and we could just jump right in to the good part of the story. I found that there was a lot more action and I really liked finding out more about the Iron Fey and how their court worked. I just love the mix of imagination, magic and adventure that’s present throughout the story, it’s not something that’s everywhere.

The Iron Daughter is an amazing sequel. After reading The Iron King, I didn’t think it could really get any better but it did. And I’m sure it will get even better when The Iron Queen comes out in February.